A TOP-OF-THE-RANGE smartphone was not smart enough to avoid being dropped in a nightclub toilet.

Despite its Snapdragon 820 processor, 12MP sensors and 2x optical zoom, the £700 Samsung S7 was unable to extricate itself from a drunken night out before disaster struck.

Digital marketer Emma Bradford said: “A truly smart phone wouldn’t have been balanced precariously on the cistern at 1AM, especially given how pissed I was.

“To be honest I feel let down because it really should have known better. It could tell me the weather and Snapchat Australia but it did nothing to avoid shattering on the porcelain of a toilet bowl.

“I didn’t do that well in school, but I’ve been to the loo thousands of times and never injured myself. Perhaps I’m the real smart one after all.”

Samsung engineer Choi Yong-hwa said: “Our next generation of phones will be more impact-resistant, waterproof to three metres and can sense when they are in a Wetherspoon’s and will immediately order themselves an Uber.” 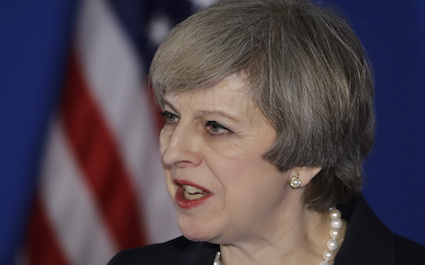 THE prime minister has warned Donald Trump she may have the upper hand in negotiations because she was head girl of her grammar school.

Theresa May said she felt duty-bound to inform the president, who has been a millionaire since she was a borough councillor, that as treasurer of the sixth-form debating society she would be no pushover.

She continued: “It was a competitive school, too. The members of Supergrass went there, if that gives you an idea of the calibre of student.

“So while he might have a 30-year record of taking advantage of anyone unwise enough to enter into any deal with him, I’m confident he won’t pull the wool over my eyes.

“Mr Trump respects that natural dealmakers’ savvy, which is why he offered me a deal which is great for Britain straight off the bat, and one I’m happy to say I’ve already signed.

“The penalty clauses don’t matter. I’ll get an intern to look at them later.”

Trump said: “I guess I own Britain now? I don’t really need it. I’ll give it to Nigel.”