THE internet has brought many gifts, like feuding with strangers and easy access to conspiracy theories. But it’s also killed off these treasures:

The Nigerian Royal family used to be fine, upstanding people, an example to their nation. Then email arrived and a couple of morally lax princes with poor English used it as an easy way to part Westerners from their money. Now their name is reviled worldwide.

Newspapers had a proud history at the heart of the local community, covering important stories like allotment robberies. But along came the internet, and people no longer had to wade through that shit for the job ads. Now their websites are all ‘ten shops near you that sell Pepsi’, or ‘seven dog breeds suitable for a Ford Fiesta’.

Remember when you found that Bowie-in-a-dress LP for £2 on a market stall? That vintage Chanel gown? Those books you’d never heard of in a charity shop? Now the minute you think of anything you want, it’s straight on eBay to find out it’s either £4 including delivery or priceless. The only stuff you stumble across is unwanted crap.

Once upon a time, there was only telly. So anyone wanting a good time had to put on a coat and go out of their home. But along came Netflix and umpteen other streaming services and suddenly there was too much must-see prestige TV for you to go anywhere.

That man propping up the bar who swore he did a loop-the-loop when he captained a submarine used to be able to get away with it. You thought he was lying but you weren’t sure, especially if you’d had a couple. Now you Google it and know it’s bollocks in seconds, and something inside of you dies.

Travellers to UK to be quarantined until they can explain f**king why? 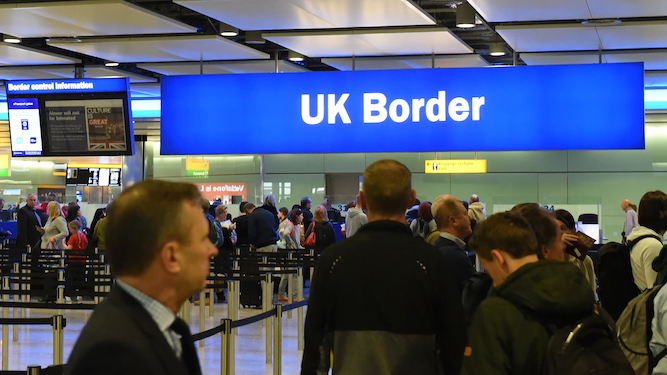 TRAVELLERS voluntarily arriving in the rain-lashed hellhole of Britain are to be quarantined until they explain what possessed them.

Freaks travelling to the UK of their own volition will be locked up, have a harsh light shone in their eyes, and asked whether they are criminally insane by interrogators.

Francesca Johnson of Coventry said: “I tried to tell them that I live here and that I’d only been on a break in Italy. They just ruefully shook their heads and told me I’d need a better reason than that.

“I said that post-Brexit, I’m not allowed to stay in Europe indefinitely and they said I could have claimed asylum because of the political conditions in Britain. They were so right. I’m in a holding cell about to get deported and I couldn’t be happier.”

“Why anyone would enter this flag-shagging Wetherspoons-drinking Kirstie Allsopp-enabling shithole is beyond me. Anyone trying should be locked up. And will be.”