NOT using that cable anymore? Don’t throw it away, because middle-aged men never know when it could be vital:

The baby born when this phone was discontinued is now old enough to drive, but any second now all smartphones might fail and the mighty Nokia brick will become the only method of communication. And what an idiot you’d feel if you didn’t have a charger.

Earphones that don’t quite work

You can never have too many of these. Especially when the sound only comes through if you twist it at a certain angle. And even then, you don’t get any bass in your right ear. You’d have to be mad to throw them out.

Satnav charger that connects to the cigarette lighter

Every printer used to take these, and what if you needed to print your Ryanair tickets and the wifi was down and the only printer available was 19 years old and proudly advertised it could also send faxes? It’d be a godsend.

It’s always handy to have a spare one of these around. Never mind that this only works with a European socket and is of dubious wattage, if you ever have a hankering to edit spreadsheets in the middle of Paris you know who to turn to.

The key to any cable stash is that every single one is impossibly tanged in a bulk of mystery cables. They have no discernible purpose, but that isn’t the point. They could still come in useful, once they’re unthreaded from all the others and an exhaustive investigation reveals what they actually do.

Six people who clearly think they're better than you 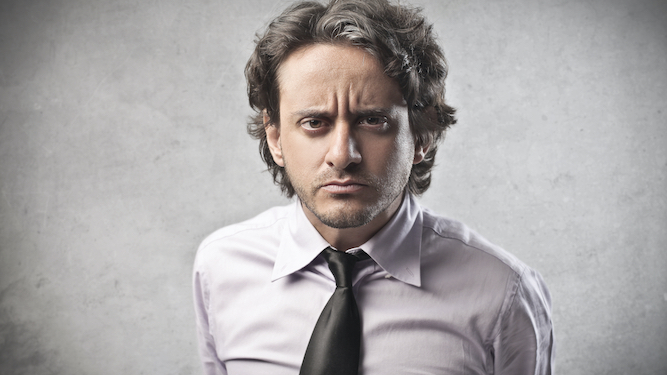 FEELING belittled? Put down? Then you’ve just finished an interaction with one of these types who believe themselves very much your superior:

Who does your boss think they are? Ordering you around like they hold a contract over your soul. Being paid shitloads more than you and being much more experienced and qualified has gone to their head. Show them who’s the real boss by doing a really half-arsed job. Who’s superior now?

Just listen to their demeaning questions: ‘Do you need a bag?’ ‘Are you paying contactless?’ ‘Is that everything?’ They’re clearly drunk on power. The way they face up the shelves reeks of self-appointed arrogance. Your custom pays their wages, so they should show you respect as you make your daily purchase of two bottles of Co-op Irresistible Prosecco and a sharing bag of Chilli Heatwave Doritos.

The person walking in front can’t see you, but their swaggering gait and swaying arms says that they think they’re the dog’s bollocks. Voice your disapproval by loudly overtaking them with a stomping march while rolling your eyes and audibly sighing. That’s what humility and regard for your fellow man looks like.

They only lower themselves to knock on the door when you need to sign for something; the rest of the time you’re not good enough. They’re corrupted by wearing a uniform and having their own special little van. The sooner they’re replaced by drones, the better.

They’re treated like they’re sweet and innocent, but toddlers act like feudal lords and we’re the rag-wearing peasantry scrabbling around in the mud. Sure, toddlers are only just developing an understanding that the world includes others, but that’s no reason to behave like they’re the centre of the universe.

A photo of you from five years ago

Urgh, just look at this prick, beaming away in a holiday photo in Sicily. Not all of us can afford jaunts abroad in the current climate, mate, read the room. Plus they’re younger and skinnier and happier than you. Truly a loathsome twat with their head up your arse.