Time traveller dismayed to see that urinals are still around

A TIME traveller from 1964 has expressed his shock and disgust that men are still urinating into a trough.

Martin Bishop, 38, travelled 51 years into the future and was suitably impressed by advances in technology but devastated by the lack of civilised toilet facilities.

Bishop said: “You have come up with 120 new ways to view pornography on the move, but you haven’t got round to fixing the unpleasant business of having to piss next to a total stranger?

“I managed to build a time machine in a decade where hallucinogenic drugs were all the rage. And here you are still living like animals. Have you no self-respect?”

Public toilet designer, Tom Booker, said “He has a point. We basically got to hand dryers and then stopped.

“Someone did come up with some kind of ‘cubicle-lite’ idea but then Dyson hand dryers came out and we all got distracted.”

Sniffer dogs ‘being set up as migrant crisis scapegoats’ 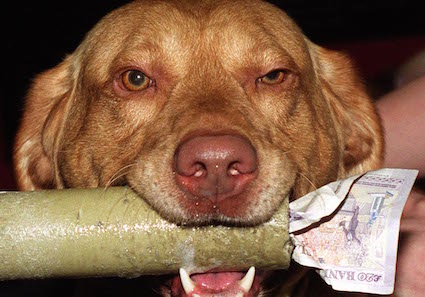 SNIFFER dogs drafted in to tackle the Channel Tunnel migrant chaos are worried they are being ‘stitched up’ by David Cameron.

The dogs believe the prime minister is using them in a ‘crude political game’ and have warned they will not be the ‘fall guys for the government’s incompetence’.

A three year-old labrador, who refused to be named, said: “I have a very bad feeling about this.

“History teaches us time and again that when the corrupt political class fails in its most basic duties the first thing they do is ‘blame the dogs’.

“We don’t just sniff out migrants, drugs and explosives. We can also sniff out the cheap lies of a third rate politician. What about that?”

A four year-old springer spaniel added: “I’ll do my job because I’m a professional, but don’t take me for an idiot.

“If Cameron turns round next week and says ‘the dogs failed us’ I swear to God I will blow the lid on this whole shit storm.”