A WOMAN who claims she did not reply to an email because it went into her spam folder is talking sh*t.

Office worker Emma Bradford actually received the message from Nikki Hollis three months ago, but simply could not be a*sed to read it.

Hollis said: “I sent Emma several emails about possible job opportunities, but they all seem to have got lost in the email system in an awful stroke of bad luck. Either that or she is a lazy cow.

“I sent her a second email ‘chasing up’ my first email, then a third one just ‘checking in’ on my second. Then I sent her one thanking her in advance for her reply but still heard nothing, so I did the unthinkable and rang her.

“Weirdly, when she answered the phone she had just that minute found my emails in her spam folder. What an amazing, statistically improbable coincidence that was.

“After all that she just said she was sorry she missed my emails and she’ll respond in due course. What does that even mean? She may as well have told me to p*ss off.”

Bradford defended her actions, saying: “Who? What? P*ss off, I’m going to lunch.”

Which awful poshos and celebs will be baby Archie's secret godparents? 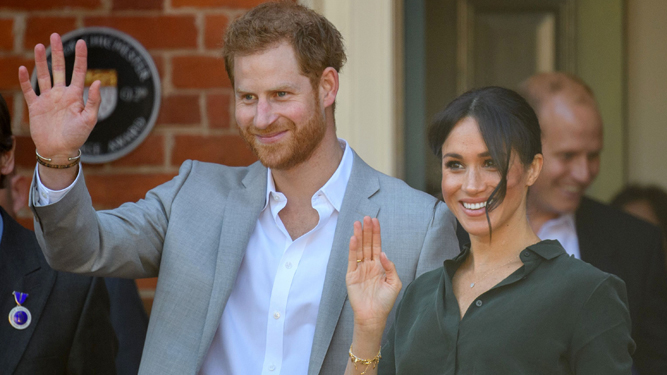 THE Duke and Duchess of Sussex will appoint their son’s six secret godparents this weekend. But who will they be?

The US tennis star has been chosen simply because she is the most indisputably A-list of Meghan’s friends, and as everyone knows that is all Meghan cares about. Will give Archie tennis lessons until realising he is a useless, unmotivated fop.

Aristocratic old schoolfriend of Harry who first introduced him to his historical hero, Generalfeldmarschall Erwin Rommel. Charlie will perform the ceremonial role of smashing a bottle of Pol Roger vintage champagne on the baby’s head then throwing him into the Thames as a public school jape.

Included to try and keep Guardian readers on side, the 6ft 5ins rapper will perform creditably as a godparent but everyone will agree afterwards he didn’t really have the material and would have been better as godparent to the child of a minor royal like Eugenie.

An old army friend of Harry’s, serving SAS officer and registered psychopath with more than 200 confirmed kills under his belt, ‘Mac’ will regularly sit Archie down, ask who he’s having trouble with at school then go round to their house to ‘sort them out’ with a grenade.

All women after two glasses of wine

Meghan’s biggest backers are every semi-inebriated woman in the world who bangs on about how marvellous she is after two glasses of Pinot Grigio, and they have been rewarded with a shared godparenthood. Will never be required to do anything or see the child, just like a real godparent.

The man who Meghan says is “like a father to me” and is as beloved by the Royal family as he is by the rest of Britain could never be left out. Indeed, the christening will largely focus on how marvellous and irresistible to women Piers is, until the whole thing is revealed to be a lonely w*nk fantasy in the toilets at GMTV.