‘Anne Widdecombe’ is not my real name – it was given to me by a cruel EU bureaucrat. From now on I am insisting on being known by my true Anglo-Saxon name, ‘Kunta Widdne’. I am sure this is all true and not something I dreamt during one of my naps.

Like Africans wedged in slave ships bound for America, we British have had our freedom taken away – our freedom to strike trade deals with countries like Fiji, Togo and Christmas Island, which makes far more sense than dealing with far-off and rude nations like France. 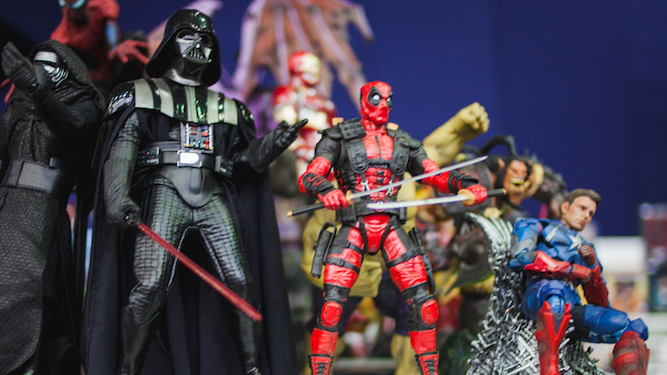 A MAN’S wife somehow cannot grasp that his figurines of Iron Man, Darth Maul and Ripley from Alien are an excellent investment.

Tom Logan’s wife Kate somehow believes his collection of sci-fi and fantasy ‘collectables’ are overpriced tat, not realising they are the valuable art treasures of the future.

Logan, 43, said: “Kate just doesn’t get that a 10” limited edition figure of Captain Picard can only go up in value from the entirely reasonable £44.95 I paid for it.

“She’s stuck in the mindset that art is just pictures by famous painters rather than scale models of the Battlestar Galactica. I hate to say it, but she just doesn’t have my aesthetic sense. Or my nose for a good investment.

“My portfolio is growing in value with the addition of each new Borg and xenomorph. I’ve currently got L3-37 from Solo: A Star Wars Story on order from Amazon. It’s important to stay ahead of the art market.

“I’m not buying them for me, it’s an investment for our kids. One day they’ll probably pay for their own children to go to university by reluctantly selling this beautiful figure of Doctor Strange.”

Kate Logan said: “Sorry, but these are just toys for grown men. I certainly hope so, otherwise yesterday when I was dusting I think I broke a priceless Ewok.”