SCANNING your own shopping provides excellent opportunities for annoying other customers. Here’s how to make everyone behind you want to ram a courgette up your arse.

If your item won’t register, don’t simply locate the barcode and make it go through. Just keep swinging that bag of potatoes past the scanner like a malfunctioning robot no one can turn off.

Don’t wait to go to Costa to chat to your partner about the fantastic discount you got on those cheap kids’ pyjamas. Do it at the scanner where there’s a captive audience, who are sure to be happy for you.

Put all your items into the bagging area, then only AFTER you’ve paid slowly start to load them into whatever wanky hessian ‘Bag for Life’ you’ve brought.

Buy loads of alcohol that requires a cashier

Don’t take your massive booze shop to a normal checkout. The flashing light is like a disco ball designed to get you into party mood!

Treat it as a fun game for your kids

It’s all technology these days, innit? And what better way to give your kids a head start in life than by letting them scan your shopping in a delightful family learning experience lasting up to 15 minutes.

There’s no better time to catch up with your mum than when you’re trying to tap the code for satsumas into the scanner. And you’ll have something fascinating to gripe about, ie. “Bloody technology!”

What sort of no-deal Brexit idiot are you? 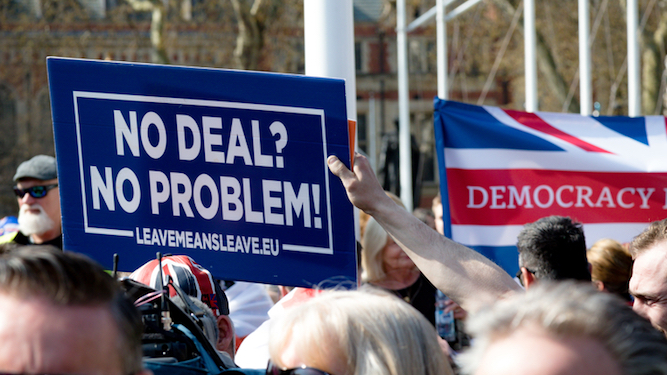 ARE you one of those people who’s decided to ignore every Brexit problem and just demand ‘no-deal’? Read our guide to what sort of bloodyminded idiot you are.

Judging by the unfeasibly angry ‘gammons’ on BBC Question Time, these Brexiters would have difficulty admitting they were wrong about what night Masterchef is on. And let’s face it – if you like getting angry and playing the victim, Brexit is LOADS of fun! So far.

You’ve had three f*cking years to find out what the EU is, but haven’t bothered and think it’s a hostile foreign power, not a boring trade organisation. It’s extremely strange and paranoid, like assuming Sainsbury’s uses mind control waves to make you buy the more expensive bacon.

These pundits actually get paid to think no-deal Brexit is great. Not to question their sincerity, but most members of the public would probably believe there really are Clangers on the moon if you paid them £500 to write a column about it every week.

Boris Johnson and Jeremy Hunt both seem to fear no-deal Brexit, but need the approval of ageing, bonkers Tory party members who really do believe it will be like living in a lovely 1950s war film.

‘Just sick of it all’ moaner

We get it. You’re bored sh*tless with Brexit now. However this is not a good reason to crash out of the EU. Lots of things are boring, like attending parents’ evenings, but you don’t deck Mr Wilkes the geography teacher then burn down the school with a flamethrower.