THE fundamental wrongness of women has been established beyond doubt.

Professor Stephen Hawking, the world’s cleverest human since 1988, has confirmed that women are not only wrong but probably stupid as well.

In an interview with New Scientist, Professor Hawking said: “Have you tried having a grown-up conversation with one of them? Fucking hell.

“They are wrong. And I know everything there is to know about the universe, so that’s that.”

Tom Logan, from Hatfield, backed Professor Hawking’s theory, adding: “I also really liked the way he described them as ‘constantly expanding and contracting’ and ‘infinitely dense’.”

But Logan’s girlfriend, Helen Archer, insisted: “He didn’t say any of that.

“All he said was that women are a ‘complete mystery’. Which is actually rather romantic and makes me think of myself as a beautiful star that no-one has ever really taken the time to try and understand.”

Logan stressed: “Saying something is a complete mystery is exactly the same as saying that it is wrong about everything all the time. As you well know.

“But let’s abandon Professor Hawking’s years of study and continue to live in your alternate universe where the laws of physics state that you’re the only one who can remember exactly what people said and the tone in which they said it.”

Archer continued: “In your universe the laws of physics state that all women are wrong except your fucking mother.

“Also, no disrespect to Professor Hawking, but you can’t really tell if he’s being ironic or not.” 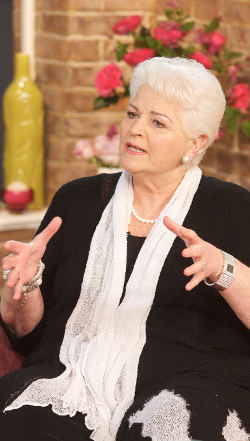 There was exciting news over the festive season as new species of marine life was found living around hydrothermal vents deep at the bottom of the ocean.

My six older brothers, with whom I always spend Christmas, remained unmoved by this and were only brought to tears by watching the protracted expiry of Pat Butcher on Eastenders. However, as I was later able to relay to them with the help of Microsoft PowerPoint, these two behemoth world events are intrinsically linked.

The bottom of the sea is probably the most inhospitable place on earth and you would assume that nothing would be able to live there. But although it is completely void of light and warmth, bizarre creatures are able to thrive close to hot volcanic vents in the ocean floor. It is almost like the seabed is Albert Square, the Queen Vic is its
super-heated, noxious spewing hole and the community of gruesome,
spineless jokes-of-nature are the cast of Eastenders.

So it is only natural that in such locations, we should find things which we would never dream of meeting in normal life. During the New Year’s episode, I could not stop mulling over the latest discovery – a lumbering beast with a leathery skin and a peculiar branched gonad. It has no discernable mouth and instead, breathes by drawing in and blowing out water from its anus. It is for this reason that you should always vacate the swimming pool if you think you can see Pam St Clement getting in. Furthermore, as is always the case when you get into deep waters with this species, you also run the risk of having a jet of sperm released close to you which is terribly inconvenient and requires a mixture of two parts nail polish remover to one part WD-40 to remove from the skin.

My point is, these creatures live in Albert Square for a reason. You would never, ever want them to figure out how to break free. After too much late night Stilton on New Year’s night, I imagined one had got out and was climbing up my trouser leg – I became so distressed that I had to use my entire week’s supply of injectable sedatives in one sitting. Who knows the psychological damage these aberrations could wreak on society given the chance? One nippy little critter with tiny holes instead of eyes and long hairy arms gives us a clue as to what lies in store if we allow it. Two words: Love Actually.

It is best for all concerned if we keep them strung out on the constant supply of ominous ‘friendly’ bacteria and perpetually billowing emissions of noxious gases to which they have become accustomed. If one gets too big for its boots again, we can only pray that Pat Butcher or David Attenborough comes along in the speeding taxi cab of life to restore the natural balance.