DRIVING would be so much nicer if it wasn’t for all the total twats on the roads doing these things:

Not letting you out at a junction, especially when it’s the end of your own bloody street and you’ve been there ten f**king minutes.

Flashing to let you out at a junction when you don’t want to pull out just yet because you’re trying to change the CD, dickhead.

Thanking you for letting them out when you actually had to because they’d pushed into the middle of the road. It wasn’t out of the goodness of your heart.

Beeping at you if you don’t move the very picosecond the lights go green.

Beeping ever. Even if it’s not aimed at you, you’ll assume it is and spend the rest of the journey pissed off about whatever they think you did wrong.

Driving up your arsehole. That’s not going to make anyone go faster. If anything slower and if you both die in the resulting collision it’s their fault.

The driver in front of you who lets every man and his driving bloody dog out of the junction. What do you want, to be made mayor?

Everyone who used to hog the middle lane but on smart motorways now hogs the third lane, leaving the inner two fallow.

Bastards who drive at 40 in a 30 zone fooling you into going 40 but you get f**king flashed.

Boy racers who’ve pimped their exhausts to an illegal 100db, making up for the fact they have such a quiet penis.

Flashing you while up your arse on the motorway, because you’re only doing 80 and they need to hit a ton.

Flashing you to turn your lights on when it’s 3pm. We’re not in f**king Finland.

Sitting there changing the CD in their ancient heap of shit when there’s a rare gap in traffic, forcing you to beep and flash.

Being there getting in your way every day of the year because driving would be a treat if the roads weren’t packed with bellends. Parking would be a ballache though.

How to summon the energy to be outraged 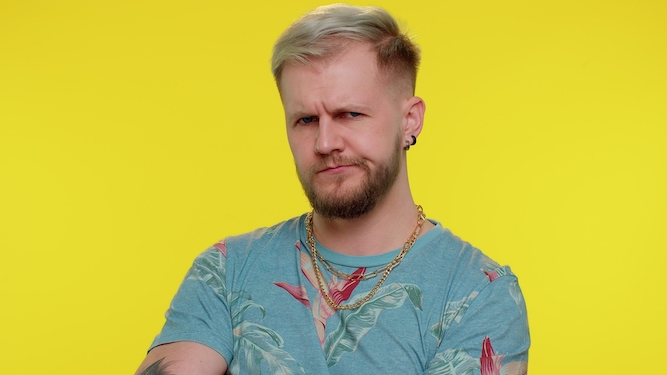 TOO unsurprised to be properly pissed off by yet another f**king Tory lockdown party? Build your anger stamina with these tips:

Reading all the details about the Downing Street BYOB party will cause tremendous strain if unprepared. Warm up by bunching your hands into fists and practising the phrases you’re about to scream, like ‘wasn’t the twat in the last chance saloon like three chances ago?’

Two months into lockdown, you were at home slumped in front of Normal People with a hand down your pants or doing your government mandated hour of exercise in a local dogshit park. Meanwhile our ruling elite was at a party. Sticks in the craw, doesn’t it?

After reading about the Downing Street garden party you’re likely to have lost a lot of fluids via raging, impotent tears. To maintain a consistent level of useless fury drink plenty of water. Four pints should keep you going until the evening news unless a nonchalant shrugged half-denial emerges. Avoid caffeine.

By midafternoon you’ll feel your energy levels flagging, especially if you’ve had a big stodgy lunch. Pick up the pace by remembering Dido Harding’s track-and-trace, nurses wearing bin bags instead of PPE, and when he said ‘let the bodies pile high’. You’ll be bristling with frustrated wrath in no time.

Look at a photo of Johnson

Only resort to this if you find yourself saying ‘well, I once met in a group of eight so who am I to judge?’ A good, long stare at the face of a man who made the most of the lovely weather while we held ten-person funerals should stoke your outrage. If only there were a way to harness that energy and use it for good.