£50 for sister, £10 for brother: how much are your family members worth at Christmas?

YOU can’t put a price on family, apart from at this time of year when you’re forced to. How much should you spend on each relative?

Your parents are just glad you’re spending Christmas with them so any present will do, no matter how shitty: a fancy washing up brush, a plain Chocolate Orange. If you spend a fiver on mum and she’s bought you a £110 coffee machine, bask in the £105 difference that shows how much you’re loved.

Siblings are perhaps the hardest to judge and most infuriating to get wrong: you don’t want to spend £50 quid on a proper present only to get some fun piece of shit from Flying Tiger in return. Sisters reliably spend more than brothers but they’re vindictive when you least expect it. Buy a range of gifts and decide in the moment.

Children are young and don’t know what money is, and no present you can buy will be as exciting to them as bits of sparkly rubbish they find in the street. So you can keep costs low but you won’t, because you’ll get overexcited and splurge £55 on the present you always wanted when you were a kid. Which they don’t want.

Grandparents already own all the things they need and all the things they don’t. Grandad still has the single malt you bought him in 2015. And they may not have too long to enjoy your gift, so unless you’re giving them something you’re hoping to later inherit stick to a fiver. They think that’s already too much.

Face it: this is the biggie. Here you’re going to be judged not only for the amount of cash you cough up but also your thoughtfulness. Your whole relationship hangs in the balance. Push it past three figures and make sure you accidentally mention the price of everything repeatedly. 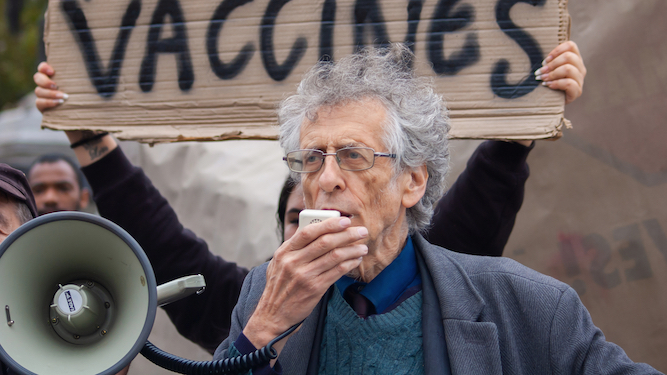 ARE you belligerently obsessed with anti-vaccine views? Here’s how to bang on about them in the most maddening way possible:

Everyone else is a mug, part of the uninquisitive flock of brainwashed sheep. Meanwhile, your evidence-free conspiracy shite is pure fact. When you call someone credulous, the irony is so dense it’s amazing it doesn’t collapse into a singularity.

Never settle on one point

Drag in own witless grievances

The tabloids and being bad at lessons have encouraged you to hate teachers, and you’re still pissed off about Zayden being suspended for setting fire to the school rabbit. So who’s in on the great Covid scam? That’s right, teachers, for closing schools when they’re all off with Covid.

Expect others to watch your two hour five minute YouTube video, but ignore anything they say. If an argument makes you doubt yourself, scuttle back to the Facebook mothership and reassure yourself your beserk opinions are totally sane.

Put the hours in

Wake up every morning on the forums and comment sections, poisoning all debate with repetitive abuse. In the pub start arguments of numbing tedium and refuse to let the issue drop. There’s marches most Saturdays. It’s not just a cult, it’s a family.

Infections are only up ten per cent this week, and ten isn’t a big number. You ate ten Celebrations earlier like it was nothing.  Also make irrelevant comparisons, like 156 people may have died in the last month but that’s every hour at the Battle of the Bulge.

Why wouldn’t the scientists who named Omicron use an anagram of ‘moronic’ for a laugh? Cast yourself adrift from rational thought, like the Daily Mail reader who sneered ‘All this over a tiny virus’. Lucky it isn’t a big virus, the size of an Alsatian. That would really be dangerous.