A massive walk to work vs having rights: The argument your brain is having about the strikes

STRIKING for better pay and conditions is vital, but walking four miles to get to work is a huge pain in the arse. How is your brain arguing with itself about the strikes?

I believe in unions. I’m a member of one myself, even though I’m a freelance graphic designer and the one I’ve joined appears to do f**k all. So while I’ve had to get up two hours early to try and get a Tube train today, and I’ve got a hangover, I am fully supportive of the RMT.

But walking to work is shit

Oh for f**k’s sake. I’ve got to spend 90 minutes miserably trudging along a road choked with traffic, just because some train drivers who spend all day sitting on their arses anyway want a bit more cash? I could do their job, even though I can’t even drive a car and don’t know one end of a diesel locomotive from another.

I want to live in a country where all workers are well-paid and work in decent conditions, whether they’re rail workers, teachers or nurses. Yeah, I understand that I’m living in cloud cuckoo land in this bin fire of a country, but we can dream our crazy dreams of a job that pays enough to have a vaguely normal life.

My weekend is ruined

To compound the bitterness I feel at not getting Glastonbury tickets, I now can’t even take the train to my mate Nathan’s house to sit in his living room all weekend drinking cans of lager, smoking spliffs and watching it on the telly in a lame attempt to recreate the magic. Thanks a lot, you Bolshevik bastards.

Anything that pisses off the government is fine by me

Ultimately, despite the inconvenience, I’m fully behind the strikes. Aside from having solidarity with the workers, it has given us all the opportunity to enjoy Mick Lynch tearing various government ministers a new one, and anything that makes Richard Madeley look like the twat he is is fine by me. 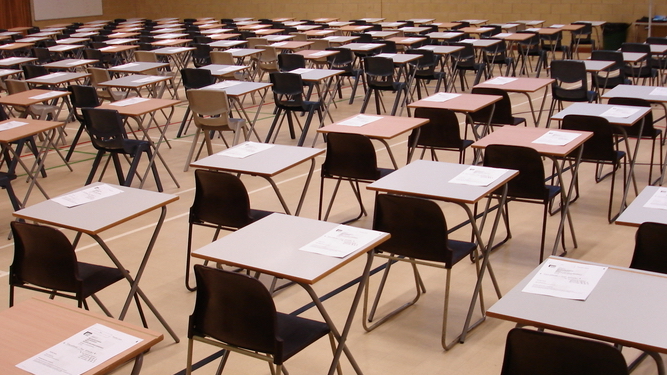 A-LEVELS have been overshadowed this year, but they’re still traumatising a new generation of students. Let’s relive that magical time of fear, insane levels of stress and wanting to cry.

You’ll start revising at 7pm. You don’t. Then it’s 8pm. Then 9pm. Then you’ll study extra hard at 10pm. Suddenly it’s bedtime and all you’ve done is eat toast and listlessly watch shit TV. Even now you can’t watch Emmerdale without a sickening sense of fear brought on by quadratic equations.

You’ll be a loser with no friends doing resits

You imagine being stuck in your hometown forever, perhaps even turning into the lonely old weirdo who drinks cider on the bench by the library. Obviously this is ridiculous paranoia. In reality you’ll get a place through clearing and spend 50 years in a shitty job bitterly imagining the life you might have had. Then you’ll die.

There’s a reason why airline pilots don’t learn to fly planes in two intensive days of staying up until 4am. It’s because it’s not possible. At best your own cramming will add a few facts about the causes of the Second Crusade, but the caffeine poisoning and lack of sleep will knock at least 20 per cent off your results in everything.

Cornered like a rat, your brain will start devising unlikely exit strategies. You could run away from home, become a shepherd in Scotland, then only return when you’re rich from your first best-selling novel. Sadly you’re forced to admit this is not a common career path.

Waiting to go into the exam

Possibly the most stressful moment in your life so far. Somewhat unfairly, your entire future hinges on being able to remember boring bits of Richard II. Your mind starts cycling through horrific possibilities – you’ll have a panic attack, start crying, or wet yourself like that girl did in a test when you were 11. She was still known as ‘Pissy Susan’ when she was 28.

A couple of questions are fine but the rest look worryingly unfamiliar. You struggle on for three hours writing increasingly sketchy nonsense. When the ordeal finally ends there’s no sense of relief, just a feeling that you’ve f**ked up. Unless you did wet yourself, in which case you’ve got more to worry about right now than A-level chemistry.

Great if you want to bump into joyful bastards who’ve got their med school or Oxbridge places in the bag. If you’ve not got what you needed you’re still in a stressful limbo, fuelling your suspicion that the people who invented A-levels were Jigsaw-type sadists.

Speaking to the university

If you get a ‘no’ from a tippy-top university you can look forward to pathetically saying ‘Actually Reading’s a lot of fun’ for many years to come. Or you’ll get into your first-choice uni despite dropping a couple of grades, in which case you’ve been put through this psychological torture that you’ll remember until death for no good reason. Thanks a lot, bastards.