Ali Dizaei: Where He Went Wrong

As Dizaei was jailed for four years, there were calls for an inquiry into how someone who could not even intimidate a member of the public without being dragged through the courts could have risen to the rank of commander.

One retired assistant commissioner said: "When I went to Hendon in 1964, our first lesson was obviously racial epithets. But our second lesson was how to pick a random member of society and systematically ruin their lives – and have a bit of fun while doing it.

"I could have sent the Prince of Wales down for a 10 year stretch if I had been so inclined, but these lads today are all fingers and thumbs."

He added: "In my heyday I was framing three, maybe four people a week. I used to love those anti-apartheid demonstrations. It was like a big, self-service carvery of communists and homos.

"Still, I'm pleased to see that whoever framed this Paki commander knows his onions."

Julian Cook, professor of police criminology at Reading University, said: "The Independent Police Complaints Commission does present an additional challenge, but the key is to keep it nice and simple. I would always advise younger officers to print out a check list, laminate it and tuck it safely behind their warrant card."

Dimwitted Mediocrities 'Not Above The Law' 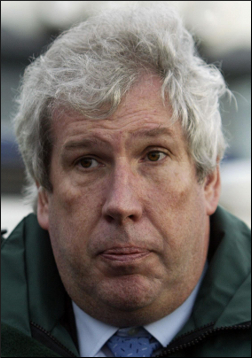 DIMWITS and mediocrities too stupid to get a proper job are not above the law, according to a legal expert.

Professor Henry Brubaker, of the Institute for Studies, said that while the Bill of Rights protects the mediocrities when they want to say something particularly moronic, it also makes clear that in the eyes of the law they remain the same old talentless no-marks unless and until they are able to marry a member of the Royal Family.

He added: "When one of these non-entities is handed a job for life simply because they turned up to enough meetings, they can often be tempted into believing they are in any way special.

"An everyday illustration of this is their continued insistence that they could command a much higher salary in another line of work, despite the comprehensive and overwhelming nature of the evidence.

"And so while the British constitution affords them certain inalienable privileges such as cheap train tickets, two vibrating chair-filled residences and a nice place to have lunch by the Thames, it does not grant them the supernatural ability to somehow shed their above-average, soul-destroying dreariness."

He added: "Simply believing yourself to be a bit fancy is no longer regarded as a robust defence strategy. Indeed, the precise legal term for such a manoeuvre is 'bullshit chancers doing their usual'.

"Nevertheless, the mediocrities will still employ expensive lawyers to concoct spurious arguments as to why they can only be scrutinised by a committee of fellow mediocrities who, for whatever reason, turned out not be not quite as cretinous as they are."

In the wake of the mediocrity privilege row, Tory leader David Cameron accused prime minister Gordon Brown of going out of his way to help three Labour MPs do something 'disgusting', possibly in his basement.

But a Downing Street spokesman dismissed the attack, adding: "'Fwah, fwah, fwah, pass the kedgeree mummy' – that's totally what he's like, isn't it?"

Meanwhile experts at the Royal Observatory at Greenwich warned that as of 2pm there remained approximately 7.5 million seconds until the general election.