A GROUP of anti-Church of England protestors has taken up residence in the London Stock Exchange, it has emerged.

The protestors moved in last night, forming a makeshift tent settlement, and citing their inalienable right to take their grievances to people who’ve got very little, if anything at all, to do with the thing they’re protesting about.

Demonstration organiser Emma Bradford said: “For too long, the Church of England has lagged behind on moral issues and failed to speak out on matters of social injustice.

“And that’s why we’re taking the inexplicable step of occupying somewhere only connected to that issue by the most tenuous of links, the London Stock Exchange.

“Unless the financial bosses of the UK listen to our plea – which, admittedly, has sod-all to do with them –  and radically restructure the Church of England,  we will have little choice but to maintain our presence here, practicing circus skills and drinking tea from Thermoses.”

She continued: “We considered a number of locations on the basis that they were entirely inappropriate to our cause, including the London Eye, the Sea of Tranquillity, the kids’ ball pit at the Early Learning Centre and my mate Graham’s garage.

“But we eventually decided on the London Stock Exchange, for the deep emotional and spiritual connection to our cause that it almost entirely lacks.”

Trader Stephen Malley said of the protest: “The drumming is rather wearing but some of the girls are very attractive and I fully intend to ply them with champagne.” 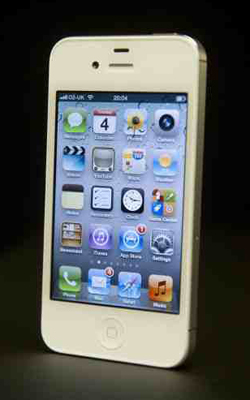 APPLE’S latest smartphone has extreme right-wing views caused by racist technology, it has been claimed.

The iPhone 4s’s unique selling point is that it ‘talks’ via built-in personality, Siri, which should respond to voice commands with helpful, intelligent suggestions.

However, due to a factory mix-up of character chips Siri has the disposition of a foul-tempered octogenarian grandmother who blames immigrants for everything from all crime throughout history to the current lack of George Formby films.

iPhone 4s owner Tom Logan said: “I asked my phone for the nearest kebab house, and it said in a crotchety tone ‘do you mean roast dinner?’

“I repeated my command and it replied ‘because you don’t want to eat that foreign shite’.”

“You can imagine my surprise when it directed me to a flat-roofed pub with three rottweilers in the garden. It turns out there was a BNP meeting in the skittle alley.

“I asked my phone why it had taken me there and it said ‘because Enoch was right’.”

Apple fan Stephen Malley said: “I thought the Apple ethos was using technology to bring people together, rather than perpetuate a hate-filled agenda.

“However as a devotee I am happy to think whatever the company tells me to. If that means buying a stocky dog and persecuting people, so be it.”

An Apple spokesman said: “We apologise unreservedly for this entirely inadvertent error.

“Anyone with a racist iPhone 4s is invited to their nearest Apple store where we will swap it for a device that appreciates hummus, niche theatre and will alert you to any interesting Channel 4 documentaries about blood diamonds.”