Sick of their instructions at wedding services being ignored, the clergy has received dispensation from the Archbishop of Canterbury for confetti-throwers to go direct to the deepest pits of Hades.

The Reverend Tom Logan said: “I don’t care if it says it’s biodegradable on the box.

“If I find so much as one pink horseshoe outside my church then it doesn’t matter if you’ve been a good Christian all your life and save orphan children at the weekends, your soul goes to the devil.

“Extreme perhaps, but you’ve never tried to peel wet confetti off gravestones at 6am on Monday with three funerals in the diary.

“God’s patience only goes so far.”

Satan said: “We’ll put them in the standard torture pits with the murderers at first, but I’m working on an endless frozen plain where drifting confetti burns little doves and pairs of bells deep into their flesh.”

Builders must whistle at men too 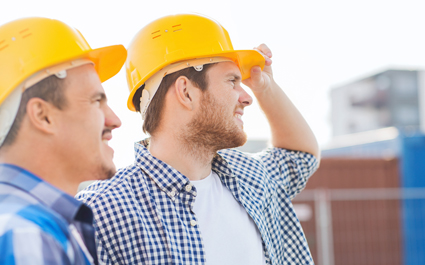 LECHEROUS builders who wolf-whistle at women must now behave similarly towards men.

Following concerns about men on scaffolding who express admiration via the medium of whistling or shouting, new legislation has been introduced to make them divide their attention between the sexes.

Builders must wear electronic ‘lechometers’ to ensure they are not discriminating in their sexually suggestive behaviour.

36-year-old builder Roy Hobbs said: “For every woman I perv at, I have to behave similarly towards a man or I get an electric shock to the groin.

“At first it felt weird yelling ‘get your cock out’ or ‘nice arms’ but there are actually some quite good-looking men out there.

“Not that I’m gay or anything, but there is one local shop worker who looks like Lewis Hamilton and I sometimes wonder what it would be like to have a garden hose pipe fight with him, and then dry off together under a big white fluffy towel.

“Or to run through a forest together holding hands and then lying exhausted in each others’ arms in a patch of late-spring sunlight.

“Of course I’m mainly into birds though. Cor, get your tits, and so forth.”