ORDINARY Britons have demanded politicians stop being on the television.

Research by the Institute for Studies found that ‘return of normal telly’ was top priority for 74 per cent of potential voters, ahead of a stronger economy and safeguarding the NHS.

Office manager Nikki Hollis said: “When I turn on the television in the evening I want to see a medical drama, chefs or something sad but uplifting about vets.

“Instead it’s people in suits looking at graphs, or some ’ordinary family’ describing their confusion about who to vote for.

“If any party promises to wrap this up early so we can have our entertainment back, they’ve got my vote.”

Plumber Tom Booker said: “I get enough debates over who’s going to empty the dishwasher, so I’m damned if I want to listen to David Cameron and the other ones niggling at each other.

“Politicians are ruining this country by making everyone turn to Netflix for their entertainment. Families used to stare at a big screen together but now everyone’s on their own laptop or tablet, it’s sad really.”

Chimps being groomed for your job 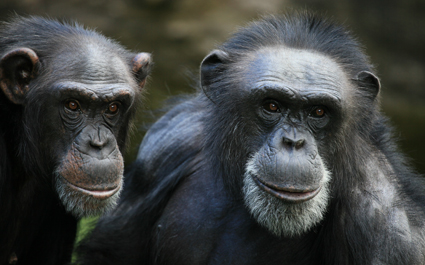 CHIMPANZEES are currently being trained up to take your job.

US legal confirmation of chimps’ ‘human rights’ means that it is no longer considered too dangerous to have them working in an office.

Company director Stephen Malley said: “Chimpanzees are intelligent, sensitive creatures that can do Excel and Powerpoint in exchange for protein.

Lead co-ordinator Mary Fisher said: “I was a bit shocked to find the new intern is a four-year-old male chimp called Pepper.

“My boss said to just sit there and let Pepper watch me, and not to make any sudden movements.

“We’ve already had four team members replaced by apes, and the new HR assistant is a horse. You soon get used to it though, it makes no real difference apart from the smell.”