Baldy bastards told to stop being so bald about everything

BALDY bastards were last night told to shut up and stop being so bald about everything.

The move comes after the latest increase in hairless men being particularly bald towards people who do not look like a big, daft egg.

Nikki Hollis, 26, said she was sick of men getting all bald on her every time she and her friends pointed at their bare, baldy heads and laughed at them in the street.

She added: “Did they leave their hair on the bus? I keep mine on top of my head, that way I always know where it is. Stupid baldy bastards.

“If they like hair so much then why dont they just grow some like any normal person? Its not exactly difficult. My baby does it, and shes only six months old.

“They just want to go around being all bald, and then get baldy with us when we point out what baldy bastards they are. Slapheads.”

Professor Henry Brubaker, of the Institute for Studies, said men who claimed they were bullied at work because of their lack of hair were just being bald for the sake of it.

He said: “Explain this to me. Soon as they start to lose it off the top they start worrying about losing the lot so what do they do? They shave it all off. How bald can you get?

“Whats wrong with keeping a few tufts? And why not dye them orange and wear big, flappy shoes so we can all have a laugh?

“Or what about a wig? The modern ones are really good. No one can tell youre wearing one. You daft, bald, wiggy bastard.” 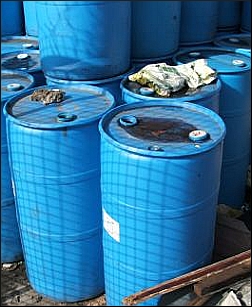 BIOFUELS are incredibly salty and don't really go with anything, hungry people in the Third World said last night.

As food crops are ploughed up to make way for biodiesel plants, local people in Africa, Asia and South America said they would really prefer rice, corn or some form of wheat.

Professor Henry Brubaker, of the Institute for Studies said: "At the moment it does make it somewhat impractical for half the global population to have their dinner.

"But in 40 or 50 years biofuels will be so efficient that we will be able to grow the crops in Africa, ship the fuel to America, refine it and then use it to ship cheese-based food products back to whoever's still living in Africa."

Charles Diogo, a farmer from Mozambique, said: "I really did try to like it, but I'm sorry, it's just a bit too diesely for my palate.

"But it's okay, don't worry, I'm sure we'll find something else to eat, somewhere.

"It's very important to us that you are able to drive to Asda in a more environmentally friendly way."