Bastards Thinking Of New Names For Your Fat Bits

THE bastard inventors of ‘moobs’ are working on names for your other
fat bits, it has been confirmed.

The shady cabal of bitter celebrity magazine hacks and gimlet-eyed marketing executives whose job it is to make everyone hate themselves is currently exploring options for at least 32 other currently-untitled flab zones.

Hollow-hearted journalist Nikki Hollis said: “Next to hit the glossies is the fatty neck, which will be termed a ‘feck’. So prepare to start worrying about that.

“You might also want to get concerned about your plump forehead, to be known henceforth as a ‘porky slap’. You definitely don’t want one of those, you worthless sack of shit.”

She added: “Do you think people will go for the idea of fat eyelids? Of course they will. We’ll say Zoe Wanamaker’s got them.

“They could be called ‘pielids’. Or does that sound too long and complicated? Our readers tend to dislike multi-syllable words.”

Professor Henry Brubaker, of the Institute for Studies, said: “Unfortunately the only way to alleviate things like porky slap, man-chin and butter flaps is buying a rebranded jar of mayonnaise for £40 and smearing it into all four cheeks.”

Stephen Malley, a newspaper reader from Stevenage, said: “I’m not pumping no bird with pielids. I’m not that desperate.

“Even though I look like a bag of mince and talk like a right fucking moron, I still have the sort of weird self-confidence that makes me think I can be selective.” 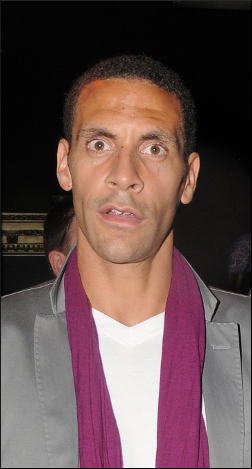 THE owners of Manchester United are to pay down their debts by making Rio Ferdinand do a fan dance for some Chinese opium lords.

In a bid to reduce their Â£1bn borrowings the Glazer family is to organise a series of Â£100,000 a head banquets in the south of France where the club’s household names will entertain some of Beijng’s most powerful fiends and their criminal henchmen.

Sources insist the Glazers want to make full use of their existing assets and will force Ryan Giggs and Owen Hargreaves to go around the table giving head massages and shoulder rubs, while veteran midfielder Paul Scholes will finish his career as a large plate of sausages.

It is understood Ferdinand’s performance will be the highlight of the evening and the central defender and England international is expected to dance in the middle of the table for up to three hours at a time.

A source said: “We’re thinking either Turkish style – silky bra and pants with a veil and some little cymbals on his fingers – or have him in the buff with just of couple of paper fans to cover his unmentionables, And a blonde wig obviously.

“If it works then we can take it on tour. Moscow, South America, Thailand – perhaps even a private show for Kim Jong Il. Rio ‘s up for it. He says he likes to try new things.”

The source added: “At the end of his performance he can then relax with the guests, though at that point he would be under no obligation to do anything he doesn’t want to.

â€œBut I’m told that if you’re sufficiently deferential they can be very gentlemanly.”