Bears revealed to be men in suits

ZOOLOGISTS have discovered that bears are in fact men in furry costumes, and not animals as had been previously thought.

After spotting one take its head off to enjoy a crafty fag, zoologists believe all bears are actually men with too much time on their hands arsing about in fuzzy outfits.

Bear expert Tom Booker said: “This has got to be one of the biggest cover-ups in the scientific community. Just think of all the wildlife rangers and zookeepers who’ve been keeping it quiet all these years.

“The evidence has been hiding in plain sight the entire time. Look at Winnie the Pooh, Yogi Bear, even that bastard Paddington. They’ve all clearly been created by people who were in on the secret and taking the piss. I feel like such a fool.

“I’ve got so many questions for the men who do this. How did it all begin? Where do you get the outfits from? How on earth do the f**kers who dress up as polar bears not freeze to death? Although in fairness a furry costume probably keeps them toasty.”

Sales assistant Donna Sheridan said: “I’ve always suspected my husband was up to something odd on his frequent work trips to Yellowstone National Park. I just hope he never finds out horses are actually us women galloping around on all fours.”

Tragic bastard doing his big shop on a Saturday night 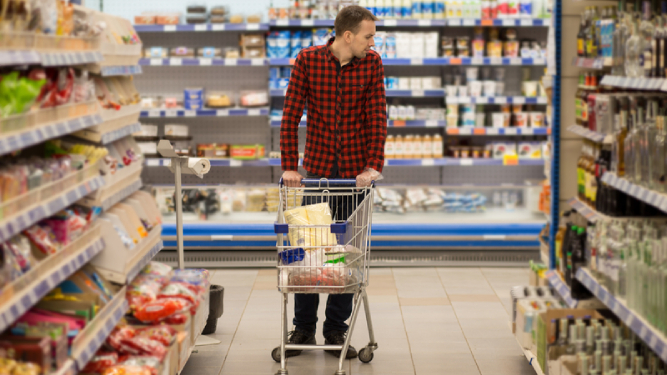 A TRAGIC man is planning to do his weekly big shop on a Saturday night because that is when the supermarket will be its quietest.

Sad, pathetic loser Martin Bishop has purposefully not scheduled any social engagements this evening so he can quickly whizz round Morrisons and stock up on food without having to interact with other shoppers.

Bishop said: “While most people will be down the pub with friends or going on dates, I’ll be filling up my trolley with minimum fuss. I think we all know who the winner is in this scenario: me.

“Who cares if most of the shelves will have been picked clean? When there’s nobody in your way you don’t care what you’re buying. Dreamies pouch? Thank you very much. I don’t even have a cat.

“Best of all there won’t be anyone queuing for the till. I can run everything through the self-service checkout then get home without having to talk to a single person. Bliss.”

Checkout girl Nikki Hollis said: “Martin does this every week five minutes before we close. I should feel sorry for him but I’m always too blinded with rage. What a tragic, irritating bastard he is.”