A CONCRETE area attached to a pub is not a garden, it has been claimed.

Researchers studied over 1,000 beer gardens and found that they were grimly utilitarian holding pens with a post-apocalyptic ambience.

Professor Henry Brubaker of the Institute For Studies said: “My local is a shithole but, as the name suggests it’s local so I’m forced to drink there.

“If you take away the Sky Sports, the vaguely comfortable furniture and the roof from that shithole, add wasps, what have you got? A shithole’s beer garden, that’s what.

“Being outside is such a novelty for British people that they barely notice their surroundings. They just buy their pints and emerge blinking into the sunlight with the giddy wonderment of newly-freed battery animals.”

Trading standards officers are considering whether pubs should replace the word ‘garden’ with the more accurate ‘external drinker containment area’.

Drinker Julian Cook said: “Personally I find the loud whirring of the pub’s freezers provides a soothing backdrop to al fresco drinking, as the sun slowly sets behind the boozer’s rottweiler-patrolled flat roof.

“But then I am just a big tattooed romantic.” 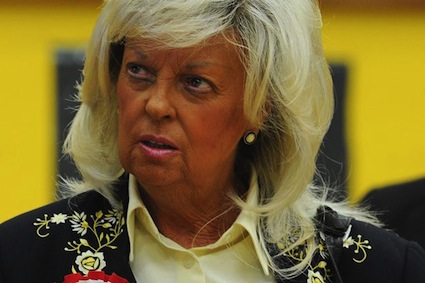 The LIBERAL Democrats were last night beaten by a fascist who looks like she was made in a primary school.

Lady Dorothy MacBeth Brookes beat the party of government into seventh place in the South Shields by-election by painting herself orange and complaining about people who look different.

A Lib Dem spokesman said: “Her colour scheme does make her look a bit like one of our leaflets, so maybe people got confused.”

A BNP spokesman said Lady Dorothy had wanted to ‘black-up’ as a provocative political statement, but chose the wrong colour of shoe polish and then decided she liked it.