Big beard and tattoos no longer a sign that you're hard

HAVING a big beard and an arm full of tattoos is no longer a sign that you would be handy in a fight.

The Institute of Studies found that the beard-tattoo combination used to convince others you were a hard-as-nails biker but now indicates that you probably read GQ and watch The Durrells.

Professor Henry Brubaker said: “These days when I see someone with a big beard and lots of tattoos I just think, ‘there goes a man who needs to be told how to feel accepted’.

“Which I don’t think was ever really a big deal for the Hell’s Angels. They probably frown upon that kind of stuff to be honest.”

Bearded, tattooed man Tom Booker added, “I like the fact that people must look at me and think that guy looks like he’s bitten someone’s ear off  behind a dodgy boozer in Hull.

“The reality is, if you look closely at my tattoos they’re mostly REM lyrics and a bunch of meaningless swirly things.”

Just f**k off out of it, May tells voters 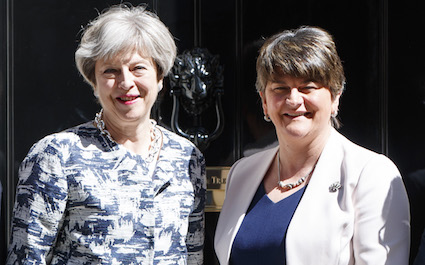 THERESA May has told Britain’s electorate that her deal with the DUP is none of their fucking business.

The prime minister has demanded an immediate cessation to media coverage, public speculation and political debate about the deal, which is completely normal and not a problem.

She said: “There is no ‘subversion of parliamentary democracy’ – whatever that means – so just shut it.

“I, personally, am definitely not humiliated in any way by having to kowtow to a fundamentalist creep when I was expecting to be crowned eternal queen, so that’s another good reason to never mention it again.

“This is grown-up business conducted behind closed doors that only affects marginal issues like your job, house, family and health, so it’s nothing to do with you. Wind your fucking necks in.”

May added: “Also, you can stop asking what kind of Brexit you’ll get. You’ll get the Brexit you’re given. And like it.”