LONDONERS are leaving the capital for Birmingham because it is the only city in Britain unpleasant enough for them to cope with.

Migrants from London are advised to choose Birmingham because it has all the things they imagine they need, like Selfridges and Michelin-starred restaurants, without the shock of pleasant landscapes or friendly inhabitants.

Estate agent Joanna Kramer said: “Initially we were helping Londoners move to places like Harrogate or the Brecon Beacons, but too often they’d be found dead within a month from the sheer congeniality of their environment.

“So we use Birmingham as a detox, to slowly bring them down from the hypershit urban sprawl of London to a smaller urban sprawl that is only megashit.

“From there they may be ready for Leeds or Cardiff, after that any of the nondescript-but-alright towns in the Midlands, and within a decade they may actually be able to reside somewhere actually nice.”

Susan Traherne, who moved to Birmingham from Wood Green last year, said: “The traffic is slightly less oppressive, some of the multi-storey car parks are original brutalist concrete, and last week we saw a canal without a dead dog in it.

“This is a paradise on earth.”

Clowning no longer seen as a desirable career, clowns complain 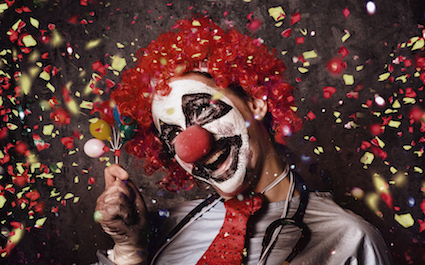 A LEADING clown union has complained that creepy clown sightings are putting young people off clowning as a career.

The National Union of Mimes, Clowns and Pierrots say that the UK’s once-thriving clowning industry could die out if children see clowns as sinister or frightening.

Norman Steele, professionally known as Jim-Jo, said: “When I grew up in Yorkshire, you either went down the mines, did factory work or took up clowning.

“The kiddies’ faces crumple in terror when they used to light with delight, the dogs howl, and it’s all thanks to these Halloween costumes and these Americans.

“There’s nothing scary about a clown. Nothing. We’re hilarious.”

Stephen Malley, aged 20, said: “I’m two years into a three-year vocational course at clown college, but to be honest I’m wondering if I made the right decision.

“But apparently while 65 per cent of graduates go into clowning or clown-related work, the rest end up in accountancy or politics.”