Bored office workers can't remember what they did before the internet

SKIVING desk workers can no longer recall how they got through the day before they had websites to look at.

She said: “I couldn’t get on the web. I couldnt check Facebook. I couldnt even send personal emails.

“I was sitting in front of a fancy typewriter with nothing to do but work.

I realised this yawning abyss of clockwatching horror was what the older generation faced every day. No wonder they all smoked  heavily. Why live longer?

60-year-old Bill McKay said: I’ve been surfing Gawker every day for so long than it seems to have wiped my long-term memory. However I think we’d get drunk at lunchtime, and of course sexual harassment was all the rage back then, which killed a lot of time.

Other popular displacement activities of the past included long personal phone calls, making paperclip chains or rubberband balls, and embezzlement.

Company head Roy Hobbs said: They were hard times, very hard. The young people of today dont appreciate how easy it is to avoid work now.

Back then it was a full-time job.

China commemorates 25 years since nothing happened 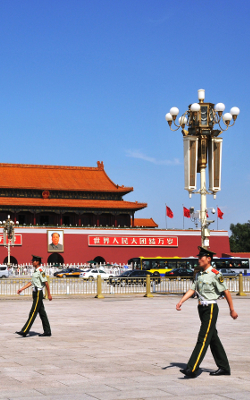 THE People’s Republic of China has marked the 25th anniversary of everyone having a pleasant, uneventful day out in Tiananmen Square.

The square, which is known internationally for its giant pictures of Mao and the respectful attitude to authority it engenders in the young, remained as quiet and orderly as it has always been.

A Chinese government spokesman said: “We celebrate a day when absolutely nothing out of the ordinary took place, except a number of students deciding never to contact their parents again.

The summer of 1989 saw revolutions across communist Europe, the break-up of the Soviet Union, and the unconditional and absolute support of Chinas rulers by the entire population.

Western reports of bloodshed are wild exaggerations of the truth, which is that a bicycle fell over with a loud clang and everyone ran away home.

The footage shown by Western media of a man in front of tanks has been doctored to remove the STOP! Children Crossing sign he was holding and the happy pupils streaming across the road to a waiting ice-cream van.”

Where is the sense in fighting for democracy when it brings you leaders like David Cameron and Nick Clegg?