Boris-Carrie wedding to be Harry and Meghan done right

THE Downing Street wedding is to be a better, less ungrateful do-over of 2018’s upsetting Royal wedding, Conservatives have confirmed.

The wedding is to take place at St Paul’s Cathedral after an open-topped carriage parade through London past delighted crowds with no reason to fear that either bride or groom are Remainers.

Roy Hobbs of Swindon said: “The last Royal wedding is tainted for me now. Tainted.

“This fairytale wedding of a dashing prime minister and his much younger bride, both of them proudly against immigration, will heal the wound left by those spoiled brats Harry and Meghan.

“Instead of ‘woke’ guests like Amal Clooney it’ll be attended by true patriots like Jacob Rees-Mogg, Laurence Fox and Katie Hopkins, and the honour guard of soldiers can stand tall knowing they’ll soon be shooting up Spanish fishing boats on the groom’s orders.

“The whole country will party at trestle tables in the streets, eating sausage rolls from Union Jack paper plates and calling Carrie the new Princess of Hearts which that other gold-digging bitch could never be. Because she’s not blonde.

“It’ll be magical and heartwarming and unite the whole country, making us all sensible people who vote Tory in perpetuity. Just like after Charles and Di in 1981.” 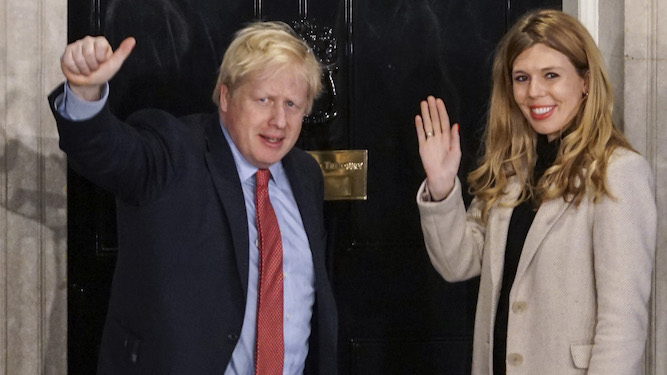 BORIS Johnson’s opportune new baby and wedding have already covered up Priti Patel’s incompetence, but what else will they distract from?

The first scan picture of the prime minister’s child should mask the news that everyone in Whitehall has been fired and replaced with teenage internet edgelords who say ‘Really you should retire at 40, get five years state opiates then be euthanised’.

The MP for Surrey Heath is unmasked as a former Bosnian warlord wanted by The Hague on the very same day, coincidentally, that Symonds goes into labour. All reporters and the vital BBC helicopter are diverted to hospital coverage. Gove just brazens it out.

News is just coming in that the pound has lost 75 per cent of its value in a day when a proud Johnson and his girlfriend emerge onto the steps with his sixth or seventh child. The newspapers love it and the pound recovers by 5.8 per cent anyway.

The birth of Boris’s other baby

The birth of a half-sister to the Johnson-Symonds baby, to a junior Commons researcher formerly atttached to the Foreign Office, takes place just a fortnight later but goes unnoticed by the media as the prime minister announces his son will be called Donald, after Trump.

The wedding of Johnson and Symonds in November will obscure announcements that the UK is to have an Equatorial Guinea-style trade deal with the EU, in that it won’t have one. Cheering crowds won’t care about food and petrol rationing as they watch the radiant bride and her dishevelled groom.

Adorable Christmas pictures of the impish No 10 newborn are used to announce a curfew enforced by the military, mandatory ID cards and random checks at roadblocks.

The baby’s first birthday will neatly hide that the UK is rejoining the EU after just six months out, because all the people with money are deserting Britain and the Tories have realised what they’ve done.