Brexiter still a loser in the more general sense

A VICTORIOUS Brexiter is still something of a loser in the overall sense, it has emerged.

Although 42-year-old Wayne Hayes is pleased that Article 50 will be triggered next week, his argumentative nature means that he lives alone in a dingy ‘studio flat’ and has microwave meals for his dinner most nights.

Hayes’s sister Emma Bradford said: “Although I voted Remain, I was actually slightly pleased when the Leavers won because it’s nice that something finally worked out for Wayne.

“Deep down he’s not a bad guy but hasn’t ever been the same since his childhood sweetheart left him for the town bully.

“Clearly he should let go of that anger and frustration rather than channelling it into an irrational loathing of the French, but nobody’s perfect.”

Hayes said: “Victory tastes so sweet, almost as sweet as the ‘Lidl 1 x Microwave Beef Meal with Gravy’ I’m having for my tea tonight.

“Because that’s how you roll when you’re a winner.” 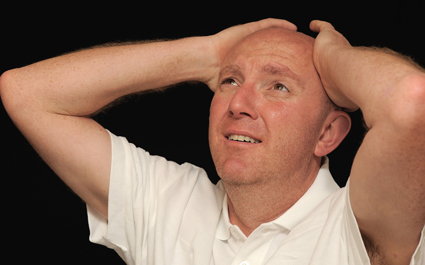 A FATHER has been forced to confront the fact that putting decking in his garden was a mistake.

48-year-old Stephen Malley broke down at an intervention staged by family members who have secretly always thought the decking looks shit.

Malley said: “That decking has been a big part of my identity for over a decade. I remember putting it down, or at least helping the decking installation man to put it down.

“I thought everyone loved it and that it looked brilliant. Now though, thanks to my wife and son, I finally understand that it is a bit weird if your garden is entirely covered by a manky wooden platform.

Malley’s wife Lisa said: “Every time I tried getting him to talk about the decking he would simply get angry. Deep down he knew it was a problem, it was just a question of how to approach it.