A WOMAN who helps fund the royal family hopes Prince Harry will return the favour by arranging some Grenadier Guards for her wedding.

Taxpayer Eleanor Shaw, 33, has been looking for ideas to make her wedding ‘a bit different’ and thinks arriving with a platoon of men dressed in scarlet with huge bearskin hats will beat the vintage VW Camper van she had previously planned.

Shaw said: “Seeing as I’m going to be paying for Harry’s big fuck-off wedding with some of my earnings, it’s only fair he returns the favour.

“His family have got loads of massive castles he could get married in, whereas my parents have had to remortgage their house just to hire out a village hall and local DJ Alan’s mobile disco.

“The Grenadier Guards are always hanging out with Harry’s nan, so he could probably get mates’ rates, plus they can have unlimited pork baps.

“It’d be great if they could bring their guns too because my uncle Graham sometimes kicks off when he’s had a few.

“Will I invite Harry? No. I know he can’t help the bad influence of his family, but we’re classier than that.” 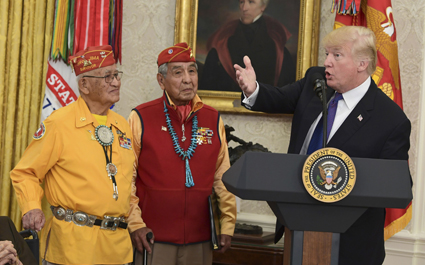 PRESIDENT Trump’s latest racial slur is part of a White House strategy to make his offensive comments more accessible to the whole family.

After Trump referred to a senator as ‘Pocahontas’ during a ceremony honouring Navajo war veterans, his team confirmed it is the first in a new series of race-related remarks that are also fun for children.

A White House spokesperson said: “We’ve had complaints that statements made by the president are unsuitable for young audiences. He’s taken that on board, and from now on, he will ensure that kids can enjoy his bigoted cartoon references.

“He’s full of ideas for the next Native American event, including bursting into a chorus of Peter Pan’s What Makes the Red Man Red  and making some whooping noises while fanning his mouth with his hands.”

Trump also plans explaining his controversial Muslim travel ban using plot points from Aladdin, describing the ‘take a knee’ campaign by drawing analogies with the crows from Dumbo, and making his case for the border wall with an impression of Lady and the Tramp’s Mexican Chihuahua.