Britain okay with a riot as long as it’s quick

BRITAIN is happy for north London to have a riot as long as it does not drag on for days.

People across the country said the big riot of 2011 was quite interesting for the first six hours but then became noisy and rude.

Martin Bishop, from Hatfield, said: I hate it when the same story is on the news for two days in a row. When it lasts for three days I become furious.

Perhaps the angry people could identify an iconic building, set fire to it and leave it at that.

At which point I will issue my official musings via twitter.

Jane Thompson, from Stevenage, said: I would be absolutely fine with 200 people throwing bricks at a library.

But do it at lunchtime so I can watch it live on my phone while Im having a rice pot.

Nikki Hollis, from Peterborough, added: Yes by all means, but confine the criminality to the outsides of buildings. Many retailers have had a disappointing Christmas and the last thing they need is wide-scale looting. 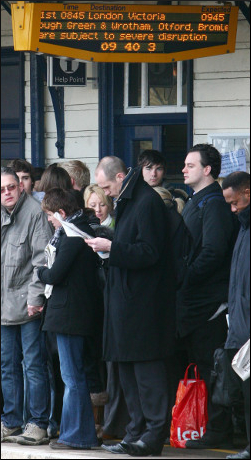 THE average workers’ commute now costs them more than they earn.

The average rail season ticket is now £1,850 per month, with an oversized individually wrapped cookie from the buffet car selling for £210.

Commuters’ Federation president Francesca Johnson said: Whatever job you do, getting there will cost slightly more than you earn.

“For example, a sandwich artist at Subway will find his low wage doesn’t quite cover the price of his bus fare, while a busy executive travelling from the Cotswolds needs to blow everything he earns on a first-class ticket so as not to mix with scum.

A Network Rail spokesman said: Our customers are spending four hours a day in our carriages – more if theres something wet on the line.

Compare that to the 10 hours they spend in their own home, for which they pay a handsome mortgage, and actually were being shortchanged.

Commuter Stephen Malley said: I still go to work because I’m conditioned to. And the coffee machine in the office is free as long as I drink three cups an hour.

He added: “The best bit is when the train steward reminds me every five minutes that the Refresca Cafe Bar is open. Otherwise I’d just be sitting there not knowing how to give them more of my money.”