British media urged to do the decent thing with a revolver

BRITAIN’S media has been urged to go into its study with an old service revolver after the Daily Telegraph
had to trick Vince Cable into revealing Lib Dems and Tories don’t
get on very well.

Across the country, abused audiences said they could not stomach another day of it as experts confirmed that Britain’s media organisations were now smearing fresh stool across the bottom of the barrel just so they could scrape it off again.

Professor Henry Brubaker, of the Institute for Studies, said: “When I saw the business secretary was the subject of an undercover sting, I asked myself – is he dealing drugs? Is he involved in some sort of scam? Or perhaps he’s just a dirty bastard?

“Turns out the answer is none of the above, but the Daily Telegraph has decided that undercover reporting should now be used for gathering Vince Cable’s gossip.”

Meanwhile, as the Telegraph’s political editor was getting little girls to do his job for him, the Today programme’s John Humphrys accused Wikileaks of peddling ‘tittle-tattle’, while deploying a straight fucking face.

But the interview with Julian Assange was cut short as the Wikileaks editor choked violently on his tea and was rendered clinically speechless while the flagship Radio Four programme devoted the next 20 minutes to following up some piece of bullshit they read in the Times.

Professor Brubaker added: “The Daily Telegraph is showered with awards because it offered to buy a CD-ROM with MPs expenses on it.

“The Guardian is currently even more pleased with itself than usual because it’s publishing classified information that not a single one of its journalists helped to gather.

“The News of the World proclaims itself as the greatest newspaper in the world because of its rare journalistic ability to record mobile phone conversations.

“And the Daily Mail continues undaunted in its sacred mission to turn everyone in Britain into a fucking nutter who believes rape victims are asking for it and that it’s fun to bully people with cerebral palsy.

“We have reached the point where the best journalist in Britain may actually be Noel Edmonds.”

People to be killed by tank commanders listening to Steps 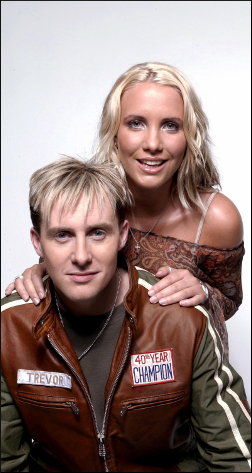 THE lifting of the ban on openly gay US troops will mean people being killed by tank commanders who are listening
to upbeat euro pop, experts have warned.

Under the former ‘don’t ask, don’t tell’ system, tank crews were forced to listen to staunchly heterosexual music, probably Sepultura or Green Day, while pressing the buttons that would make the thing on their screen die horribly.

Defence analyst, Roy Hobbs, said: “One of the key repercussions of allowing soldiers to be overtly homosexual is that catchy music with a good beat and a feelgood sensibility will become commonplace in the theatre of war.

“The prospect of Iranians being blown apart by a missile fired from a tank in which Better Best Forgotten by Steps is playing quite loudly raises some thorny moral issues.

“It’s one thing to kill. But to do it in a gay way? While listening to music that has an associated dance routine involving hand movements?

“Currently there’s nothing in the Geneva Convention about Steps, Erasure, or even the Pet Shop Boys. Perhaps there should be.”

Gay US army tank commander, Nathan Muir, said: “It’s a common misperception that homosexual soldiers like myself will be singing along to uplifting dance anthems or the Sound of Music soundtrack while piloting our engines of death.

“While my in-tank ipod does include a smattering of Sinitta, Dr Alban and the 80s disco track Menergy by Sylvester, it’s far from just superficial dance pop. I mean, there’s loads of early Kate Bush on there too, like The Sensual World.

“I really appreciate how its ethereal vibe and sparkling arrangements help me to focus as I’m leading my squadron through a battle-scarred city where danger lurks around every corner.

“And it’s not gay at all, just really magical.”