The dreamcatcher, property of Swindon housewife Mary Fisher, reached capacity during a dream about walking in the Andes with her best friend’s niece and having lunch in a prison canteen with Yasmin Le Bon.

The emergency services were called after a neighbour reported being chased by a shadowy figure who walked slowly but always seemed to be right behind her.

Firefighters are attempting to clear the flood of nagging anxieties while struggling with the sensation that they are late for an important job interview.

Dreamcatcher expert Tom Booker said: “This is a warning to those who deny the dreamcatcher is a highly advanced piece of technology which works exactly as promised.

“Miss Williams’s dreamcatcher should have been serviced every 18 months by a qualified Chippewa technician to drain her psychic effluvia.” 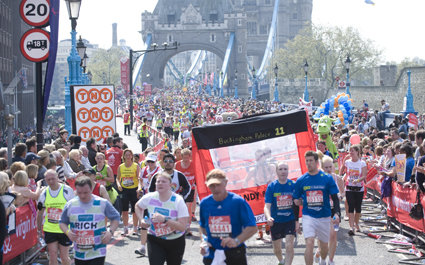 EVERYONE will be bored of marathon anecdotes by 2pm, say experts.

Chapped nipples, sore feet and the sight of Jonathan Pearce’s sweaty arse will quickly cease to be acceptable topics of conversation as runners are met with widespread indifference.

Telesales drone Tom Logan said: “Yeah, let me guess, it was really tiring around ‘mile 16’ but you pushed through the wall and got a total feeling of achievement crossing the finish line, am I right?

“I’m trying to eat some crisps here in peace and quiet, how’s that for a  ‘personal goal’?”