MEN are turning to a life of carefree homosexuality to avoid the expense of wives and children, it has emerged.

A sharp drop-off in the men’s grooming market has been linked to heterosexual men growing the thick facial hair which they believe will make them enticing to other males.

Civil engineer, Bill McKay, said: “With the economy unlikely to improve in the near future, there’s no way I can afford nice dresses and designer chocolates, let alone the school uniforms and hefty tuition fees that are the eventual consequence of those bribes.

“Alternately, if I bag myself a hairy builder then not only will he have no interest in Cath Kidston products, but also he can build my extension for free while we share interesting sport-related banter and laugh at the Peter Kaye jokes in Nuts magazine.”

He added: “I suppose we’d have to have sex at some point. I’d just see that as a healthy male challenge involving physical hardship, like kayaking.”

Craig Williams, 40, from Glasgow, said: “Financially I think gayness is really the way forward, plus men don’t have all those emotions like women do.

“And morally it’s fine because apparently all my favourite action film stars are secretly homosexual.

“But other than growing a beard I don’t really know where to start. My friend said gays have a secret mating whistle that they do by blowing onto a celery leaf.

“I think I’ll just cut the arse out of my trousers and wander around until something happens.”

Boris not liking this job anymore 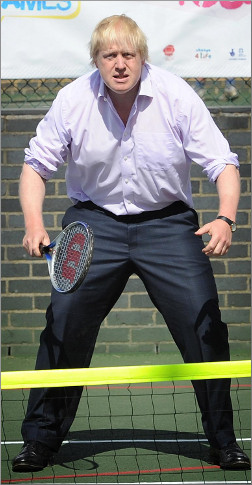 DAILY Telegraph columnist Boris Johnson does not like being mayor of London anymore, it has been confirmed.

Returning to what remains of the capital last night, the glum-faced mayor stressed that tiptoeing through the charred remains of a sandwich shop in Hackney was not his idea of a ‘jape’.

Writing in the Daily Telegraph he said: “I want it to be about the Olympics and big, friendly bicycles. This is just ghastly.

“It seems that many Londoners and I now disagree on what constitutes a ripping good lark.

“To me it’s cycling to a community centre while wearing an endearing helmet and then making a speech that is little more than a thinly-veiled leadership challenge to David Cameron.

“It’s asking some incredibly rich people what I can do to make them richer and then have them all applaud me loudly and compliment my charming hair.

“I don’t want to do it if it means I have to come back off my holidays and stare at some burnt-out car while looking all serious, when in actual fact I’m just trying to work out whether it was a Mondeo or a Vectra.”

Prime minister David Cameron also returned to London last night to ensure that waitresses in the riot hit areas were being tipped properly.