STREET fundraisers are to be psychologically re-conditioned to reduce their self-confidence to human levels.

In a move designed to make high streets slightly less wretched, the constantly effusive bastards will undergo treatment which includes having their eyelids stapled to their forehead while a huge screen shows a nine-hour film about why they are not even remotely amazing.

Psychiatrist, Dr Tom Logan, said: “The images run the gamut of all the things they like – didgeridoos, massive trance clubs, fire ‘poi’ – while a Bernard Cribbins voiceover repeats the phrase ‘this is just shit’ until their brains can’t hear anything else.

“‘They are then given a dose of LSD before a small wizened man in a terrifying spider costume is wheeled in to make cutting, witty remarks about their dreadlocks, facial piercings, flaccid wooly hat or failed acting career until they are reduced to a shuddering, weeping mess.

“At that stage we usually give them a nice cup of tea and a cuddle and tell them they’ll be fine but we do know where they live.”

Street fundraiser Stephen Malley, formerly known to himself  as ‘Rat’, recently completed the therapy: “I used to be the sort of person who would bound up to strangers in the street like a clipboard-carrying springer spaniel and ask them if they wanted a free hug in a booming, highly affected voice.

“Now I mostly just sit in the corner and tremble.”

Dr Logan added: “They’re not such bad kids really. It’s the team leaders you have to look out for – they’re usually Australians called ‘Chip’ or ‘Renny’ who are good at snowboarding and would high-five a grieving widow at a funeral.

“I can’t tell you what happens in Room 23 but it involves something called the ‘claw baby’.”

Libya facing civil war over how to kill Gaddafi 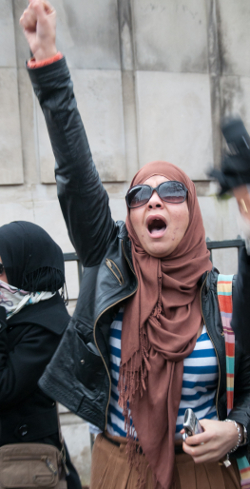 LIBYA was split down the middle last night over how Colonel Gaddafi should eventually be killed.

Amid angry scenes some called for a kangaroo court and a hastily organised firing squad, while others are demanding a crazy show trial and a televised hanging.

In a warm and intelligent speech littered with good natured death threats, Gaddafi tried to ease the concerns of a furious population by saying they were all on drugs and that he would really like to massacre them.

But as Western nations began to evacuate their stranded Libyan oil money, millions of ordinary people said they would fight to the death over how Gaddafi should be executed.

Sulieman al-Kalifa, spokesman for the February Kangaroo Movement, said: “The Romanians didn’t dick about with Ceausescu. They scooped him out of a tank, took him to a canteen, asked his name and then whacked him behind a bike shed.

“The whole thing took about 20 minutes. Bish bash bosh. That’s got to be better than a lot of farting about.”

But Mohammed Bakra, deputy chairman of Crazy Trial Now, insisted a Ceausescu-style firing squad would deprive Libya and the world of an hilarious two-month court case.

He said: “Basically, we just stick him in a glass box and let him go mental.

“It will be very, very funny and we can make CDs and podcasts. You could sit on the tube listening to Colonel Gaddafi going on about cheese-flavoured Western pixie-devils and why you should never share a sleeping bag with a bearded man.”

He added: “I reckon we could get six, maybe eight weeks out of it before we get bored. Then we just find him guilty and hang him in the football stadium at seven o’clock on a Saturday night.

“We could get McFly to do the warm-up.”