Child who calls parents by their first names freaking everyone out

A CHILD with trendy parents who uses their first names instead of ‘mum’ and ‘dad’ is having a chilling effect on people.

Seven-year-old Tom Booker’s parents Richard and Helena think it is progressive and egalitarian for him to use their real names, but in reality it is incredibly creepy.

Family friend Emma Bradford said: “The first time I heard Tom call his mum ‘Helena’ the blood turned to ice in my veins. They think it makes him grown-up but he sounds like a junior axe murderer.

“It’s just not natural. If you go round to their house it’s like they’re office workers who keep having meetings with one unusually small colleague.”

However Helena Booker said: “Treating Tom as an adult and equal is great for his development. That’s what it’s all about, not some utterly pathetic attempt to be different.

“It’s not creepy and Tom will not, as my father-in-law has suggested, ‘turn into Damien from The Omen’.”

Professor Henry Brubaker of the Institute for Studies said: “Hitler, Pol Pot and Genghis Khan all called their parents by their first names. Correlation doesn’t show causality, but there’s no smoke without fire.”

How to blame other people for your Brexit bullsh*t 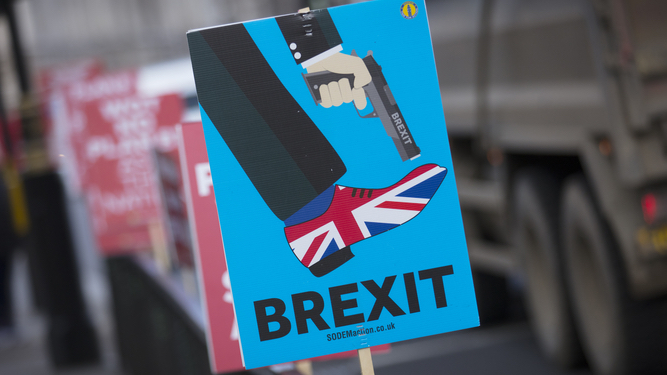 WHETHER you’re the prime minister or an ordinary Leaver, it’s time to start blaming other people for Brexit. Here’s how to try and shift the blame.

The EU are being tw*ts about the backstop

Boris Johnson’s current strategy. Well worth trying because no one can face reading up on the customs union and many Britons’ understanding of modern Europe appears to be based on Sharpe’s Rifles.

Remainers have completely failed to: devise a foolproof Brexit plan; negotiate new trade deals; support something they don’t agree with which would have made no difference anyway. If the blame for Brexit going wrong lies anywhere, it’s with these total b*stards.

The EU are being tw*ts in general

Good bit of blame-shifting that ignores the fact we’re trying to leave a trade bloc without losing any benefits. People say this is like cancelling your gym membership and still expecting to use the equipment, but it’s more like leaving because you’re not allowed to smoke, then ramming a dumb bell up your a*se.

Apparently if you call people out on their bigoted views, it makes them upset and therefore it’s not surprising they support Brexit. About as logical as saying serial killers aren’t to blame for murdering people and it’s the victim’s fault for being so temptingly alive.

If you’re running out of people to blame, be a bit creative and claim evil fairies are flying here from continental Europe and sabotaging Brexit. Your Brexiter mates probably don’t care whether what they believe is true, and may even try to shoot them down with air rifles.