Controlling psycho has problem with boyfriend getting wasted every night

A NIGHTMARE psycho bitch won’t let her boyfriend get hammered every night, his friends have confirmed.

Manipulative, controlling nutcase Emma Bradford had a go at partner Tom Logan just because he spent their rent money on a midweek bender with his unemployed mates.

Logan’s friend Wayne Hayes said: “We liked her at first but she seems more and more mental.

“Last night she flew off the handle because a bunch of us piled back there at 3am to smoke bongs and listen to banging techno.

“She came down in her dressing gown and was all like ‘I’ve got work tomorrow and I can’t sleep, can you at least turn it down please?’.

“Seriously, she looked like a crazy, tired witch or something.”

Logan’s other friend Roy Hobbs said: “She’s got this weird attitude since Tom lost his job because of booze-related unreliability. Apparently she ‘needs sleep’ because she’s got to ‘pay the bills’ and is ‘knackered’.

“Seriously she won’t let him do Class A drugs on a Tuesday, or at least if he does she gives him the silent treatment or tries to reason with him. We call her ‘the fun police’ or ‘the puppet master’.

“If she’s not careful he’ll walk out, and then where would she be?”

Women’s beach volleyball not actually sexy unless you are weird 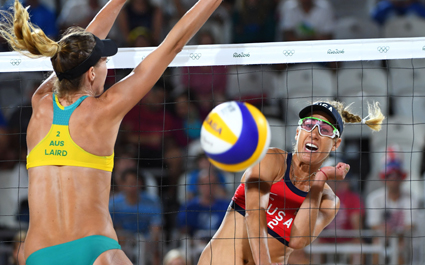 WATCHING highly skilled female athletes ruthlessly competing is not as sexy as has been claimed, men have finally realised.

Office worker Tom Logan said: “When the Olympics started showing women’s beach volleyball I immediately sat down for a good ogle, but then realised that was a bit weird.

“The players aren’t doing it to be sexy, they just want to score points and win the tournament. If they knew I was sitting there going ‘phwoar’ they’d probably consider it an insult to their years of training.

Fellow man Wayne Hayes said: “If me and my mates sat around gazing salaciously at Paula Radcliffe going through the pain barrier that would make us strange fetishists.

“So I’m not sure why we thought women’s beach volleyball was hot, because they don’t look flirty or aroused, just incredibly focused and quite angry.

“The oddest thing is that my laptop gives me access to every form of erotica imaginable, so I don’t need to watch hours of a quite boring team game to see a lady in her pants.”