A MARRIED couple who have not spoken since 1994 have no idea what they are called, their children confirmed.

Following an argument about Dale Winton’s sexuality twenty years ago, the Derby couple have communicated through their children until they each receive the apology they believe they are due.

Daughter Emma Bradford said: “They’ve been saying ‘Tell your mother’ and ‘Tell your father’ for so long that they’ve even changed their debit cards accordingly.

“I have to admire their single-mindedness, but I’m at university now and being texted every 10 minutes for find out if Dad’s working late or to for Mum to pass the ketchup is impractical.

“It’s also beginning to affect my brother, who’s only 12. I don’t want to think about the maths behind that.”

Attempts to end the huff with divorce have foundered when courts refused to allow ‘Her’ or ‘He knows exactly who I mean’ as respondents in the application.

Mr Bradford said: “I’m pretty sure her name’s on the wedding album in the loft, but if I go up there she’ll think I’m checking the insulation like she asked me to in 1990 and I won’t give her the satisfaction.”

Nothing ruled out including war, says Cameron 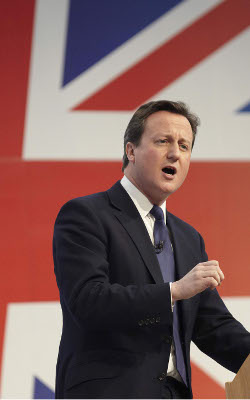 THE prime minister has promised he has ruled nothing out in negotiations with the EU, including a decade-long transcontinental war.

In a game-changing speech Cameron said that he will limit free movement of workers within the EU even if he has to mine the Channel, invade Calais and launch nuclear strikes on Bulgaria.

He continued: We can stay in the EU. We can leave the EU. Or we can destroy the EU utterly and plant the shining standard of the Union Jack in the ashes.

When I sit down with Angela Merkel and Francois Hollande, there will be a loaded pistol on the negotiating table. The safety will not be on.

If every household in Britain loses a son, if every city is bombed to a ruin, if our nation becomes a pariah for centuries to come I will not back down.

That is how much I want to win this election.

Camerons speech has been applauded by the public, who have heard from their grandparents and films how great war in Europe is and are keen to try it for themselves.