Cup A Soup, and four other bleak as shit lunches

SOMETIMES you’ll look across at a colleague in work and see the dogshit lunch they’re having and you’ll be filled with pity. Here’s their awful food.

Until ice becomes an acceptable sandwich filling, slices of cucumber are the closest you can get to having water in a sandwich. Aside from how profoundly dull they are, they absolutely do not travel, or keep, well. Seeing someone peel clingfilm off a pulped mass of soggy bread and cucumber at 1pm is one of life’s great tragic sights.

Why not bring the vibe of wartime rationing to your lunch-hour with Cup A Soup? Make your colleagues sick with envy that they aren’t also tucking into some tepid chicken-flavoured water in a mug.

Most offices will have one health-obsessed employee whose meals are centred entirely around the concept of protein consumption. Usually a sad-eyed but profoundly muscle-bound 30-year-old in a too-tight shirt, they will chug litres of protein shakes daily – except for their cheat day – where they will consume five plain boiled chicken breasts.

There is absolutely no excuse for cooking a burger in a microwave. And yet some people will gladly slide one of these monstrosities into the kitchenette’s one microwave each day, making the whole office reek of bad beef.

Your lunch hour is supposed to be a time of relief. A brief reprieve from the tedium of work. Well imagine the dread you’d feel in the pit of your stomach as you saw lunchtime approaching knowing that all you had rattling around in your sad little lunch box in the communal fridge was a pair of pre-peeled hard-boiled eggs. 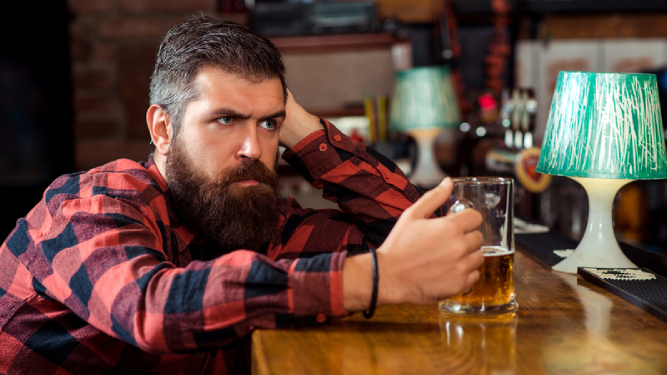 BEING a man has its perks, but they’re also defined by broad generalisations that no one bats an eyelid at. Here are five blanket statements that blokes suffer on a daily basis:

Patently untrue because lots of men were crushed by how shit the last Star Wars trilogy was. Whole theatres were filled with men quietly sobbing into their popcorn as they learnt that the Emperor was Rey’s grandad for some f**king reason. They just usually bottle everything up out of fear of being called ‘bubbly’.

They never really grow up

If being in touch with your inner child makes you immature, then sure, men are guilty as charged. Did it ever occur to you that adult dudes playing Xbox for hours on end in their man caves are actually nurturing the vulnerable part of their psyche? Didn’t think so. That would require empathy.

Most people are. It’s just that men are extremely bad at hiding their fascination with intercourse. Want to put your head above the parapet by saying not all men are like this, and that you’re a progressive sort of guy who isn’t piloted by the needs of his genitals? Good luck with that.

They don’t help around the house

This is such an old-fashioned stereotype that should have been put to bed years ago. Thanks to the haranguing of their long-suffering mums, girlfriends and wives, the modern man performs up to 20 per cent of domestic chores. It’s just that he does them so badly and infrequently that it looks like he’s not pulling his weight.

Women’s magazines would have you believe that blokes are all ‘wham-bam-thank-you-ma’am’. In reality most fellas don’t even make it to the ‘bam’ before blowing their beans and falling asleep, therefore sparing their partner a late night of exhausting physical acrobatics when they’ve got work in the morning. And people still have the nerve to say chivalry is dead.