BRITAIN’S cyclists have decided to stop showing everyone their reproductive organs.

A trend for looser cycling apparel means the public will no longer be exposed to images that would be pornographic were it not for a thin layer of Lycra.

Cyclist Tom Logan said: “I have started to think that skintight synthetics which showcase your penis and testicles in forensic detail might not be a good look after all.

Meanwhile female bicycle riders have finally responded to the agonised looks on their colleagues’ faces as they walk into the office with their vulva clearly visible.

Cyclist Nikki Hollis said: “We’ve discovered you can ride a bicycle without looking as though you’re offering your genitals to other road users like a baboon on heat.

“Of course this may just be temporary, and next year cyclists will all be wearing gossamer G-strings and tribal-style penis sheaths.”

Members of the public have welcomed the move, saying the small number of attractive cyclists did not compensate for having to look at the private parts of all the ugly ones.

Van driver Roy Hobbs said: “I hate it when a lovely bum goes past but when you catch up with them you discover you’ve been ogling someone who looks like Alf from Home & Away.”

Dads deprived of sexual arousal at the breakfast table 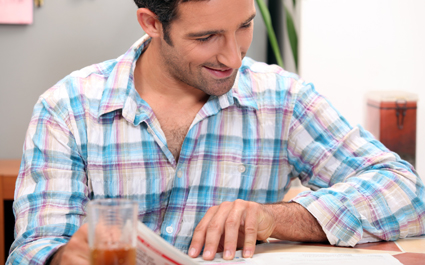 FATHERS have responded to the end of Page 3 by claiming it was just an innocent bit of sexual stimulation to enjoy with their cereal.

Following reports that The Sun would no longer use topless models, dad-of-two Roy Hobbs said: “Another victory for the PC brigade. What could possibly be wrong with looking at large exposed breasts and enjoying a warm feeling in my genitals, while around me my family eats toast and prepares for school?

“All I want is to have my Bran Flakes while forming detailed mental images of sexual intercourse with a 19-year-old girl called Mandy from Yeovil.

Anti-Page 3 campaigner Mary Fisher said: “This is a great victory for feminism, especially because print media and newspapers are so popular these days.

“As far as I can see it is now pretty much impossible to see naked women, unless you do something really complicated with computers.”