BRITAIN’S 500,000 cynics have been released from temporary incarceration below the Olympic stadium.

Sceptics, scoffers, naysayers, jeerers, doubters and doom-mongers had been rounded up following a trawl of internet message boards and social networking sites, and imprisoned for the duration of the games.

Cynics spent the games in dank underground quarters, watching a computer-generated alternate, disastrous games on screens in their cells.

In the cynic-friendly CGI version of the Olympics, London’s transport system collapsed under the weight of extra visitors despite all events being sparsely attended, a grossly overweight Jessica Ennis came last in the Heptathlon and Tom Daley snagged his trunks on the diving board before plunging naked into the pool.

London 2012 naysayer-wrangler Susan Traheme said: “The cynics were certainly aggrieved when we came to pick them up but, being cynics, they were not surprised.”

Traheme said: “Without them, there’d be nobody to point out that the actual ‘legacy’ of these games will be the same as it always is for any city mug enough to host them – an enormous bill and a white elephant of a stadium.”

“Also a cynic-free London could get carried away and vote in Boris Johnson as Prime Minister For Life.”

Meanwhile, the ‘Gamesmakers’, grinning automatons specially designed for the games have been dismantled and boxed up for use in Rio in 2016.

“The cynics were right about that.”

Murray vows to drive the English out of Scotland 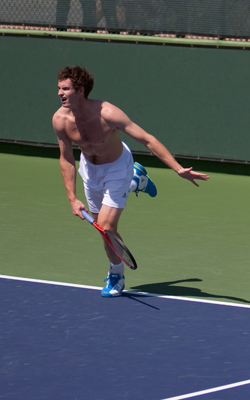 TENNIS champion Andy Murray is using his fame to unite Scotland against the English, it has emerged.

The 25-year-old Scot is the first British person to win a Grand Slam title in 76 years, making him a huge celebrity in his home country where he is known as ‘Braveracket’.

Murray said: “This victory is sweet, but it is nothing compared to the taste of freedom.

“What you have seen here today is just a small example of what a Scot can achieve if he is bold, carries a metal implement and has vengeance in his heart.

“There is one true monarch of Scotland – the rightful king Sean Connery. With the English fled or dismembered and Sean on the throne, we may set about building a strong, free, golf and tennis-based country.”

Murray’s victory was greeted with cries of ‘Freedom!’ from his legions of face-painted Scottish followers – mostly wild-haired men and women clutching emaciated babes – thousands of whom had gathered outside the Arthur Ashe stadium but were refused admission on grounds of having lice.

Andy Murray is a direct descendant of the outlaw tennis player William Murray, who in 1291 offered to beat any English man in straight sets. But although unassailable on the court, William Murray perished when troops set fire to his bothy.

A spokesman for Buckingham Palace said: “This is a great day for British sport. However treason cannot be tolerated, and will be repaid with death.

“Murray can pledge loyalty to the Queen and live out his days as a wealthy Lord with rich lands and many sons, or we’ll have his head on a stick.”