The heterosexual father-of-three, who stumbled on television coverage of the event while channel-hopping for some football, was surprised by how big some of those men are.

He said: “I thought they were generally more on the slim side. But some of them are built like boxers.

“Big chests, and big legs too.”

Booker continued to watch footage of shirtless men on carnival floats gyrating to dance music, as his wife prepared the dinner.

“I don’t know what to make of it, all these men dancing with each other, wearing hats and little shorts.

“Look at that blonde one, he’s got thighs like sides of beef. Not at ounce of fat on him though.

“He probably does a mixture of swimming and weights because he’s not massive but he is toned, as I believe they call it.

“I wonder what his name is?”

On hearing his wife approaching, Booker immediately changed the channel and pretended to have been watching Top Gear for the entire time. 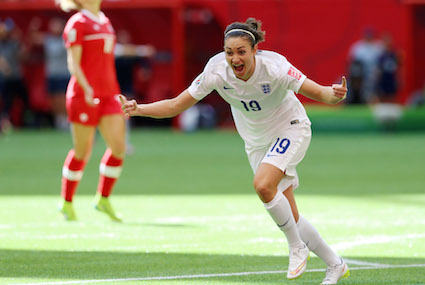 ENGLISH men are not as good at playing football as English women, it has been confirmed.

As the England women reached the World Cup semi-finals – a feat not achieved by their male counterparts for 25 years – English men must now defer to ladies on anything to do with football.

Fan Martin Bishop said: “I’ve spent my whole life deriding women’s football, but it is now an undeniable fact that they are better at it than we. I suppose I feel cheated.”

He added: “Now, before I tweet an opinion about the latest transfer news for example, I have to run it past my wife and daughter first.

“So far they have been dismissive and rather mean.”

FA Chairman Greg Dyke said: “For English teams, competing in major tournaments is all about trying to wipe out years of ‘hurt’.

“As our best national side right now, the Lionesses must shoulder the burden of the men’s 49 years of hurt, as well as their own 24 years of hurt.

“That’s a grand total of 73 years of hurt which will be instantly eradicated if they actually win this thing.