THE Daily Mail achieved perfection today after publishing a photograph of Eva Braun posing as a black man.

After 115 years the newspaper has finally combined race, fascism and women’s interests in one flawless image.

Media analyst, Julian Cook, said: “This is multi-layered journalistic perfection on a scale almost too overwhelming to comprehend.

“It is both a fascinating insight into the playful side of an enigmatic celebrity as well as a provocative statement about political correctness gone mad.

“This one image will start a million conversations about her hair and her clothes, why political wives should stay in the background ‘unlike that Michelle Obama’ and why the BBC should bring back the Black and White Minstrel Show if only it wasn’t run by Muslims and homosexual Jews.”

He added: “This is why Paul Dacre gets the big money and the very best medication.

“I beg him with all my heart to let Jan Moir write a piece headlined ‘Isn’t there a little bit of Eva Braun in all of us?’.”

Helen Archer, professor of media at Reading University, said: “We’ll look back on this day as the high watermark in the Daily Mail‘s sacred quest to combine fascist sympathising with the cult of celebrity.

“That said, it is also a departure from the Mail’s recent penchant for publishing intrusive photographs of famous women without any make-up on.”

No such thing as Arsenal fans 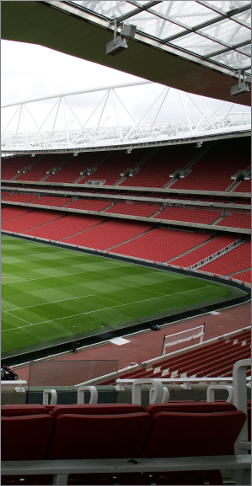 THERE is no such thing as an Arsenal fan, it was confirmed last night.

Across north London the fan base of the unsuccessful football team suddenly ceased to exist as people previously believed to enjoy watching them said they had never even heard of Ian Wright.

Meanwhile thousands of puzzled Tottenham Hotspur fans banged loudly on neighbours’ doors only to find that they had gone deaf or that the only sport they had ever enjoyed was rugby league.

Stephen Malley, from Highbury, said: “I find football to be rather ghastly and prefer to spend my Saturday afternoons browsing antique shops and looking for interesting teas.

“That? That’s a cardboard cut out of Olaf Bergkamp. He is a concert pianist of some note though I believe his twin brother was a footballman who may have plied his trade in the vicinity.

“And yes, some concert pianists do like to wear shorts. They find it more comfortable.”

Thierry McKay, from Islington, said that for some reason he had received 648 text messages from a Spurs-supporting acquaintance including one threatening to dawb ‘Spurs Champion’s League Quarter Finalists’ on his forehead before forcing him to perform oral sex with a smile on his face.

Meanwhile Tottenham are celebrating their win over a Milan side with the combined age of Ben Nevis, and looking forward to their inevitable defeat in the next round, probably at the hands of something called a ‘Schalke’.

The club has also arranged for a laminated printout of last night’s result to be placed in the trophy cabinet at White Hart Lane alongside their 2008 Fair Play award and Ledley King’s victorious £5 scratchcard.