SHOULD we really describe people as ‘not suffering fools gladly’ when in fact they’re just opinionated gobshites? Here are some weird euphemisms for unreasonable folk.

If you want to call someone an absolute twat in a nice way, this is a good phrase to choose. It was first coined by Saint Paul in his second letter to the Church at Corinth, so you could even say it is the Christian way to slag someone off.

This is a fancy and complicated way of describing an unreasonable person. Hopefully they might also be stupid too, so that they think you’re complimenting them in a posh way, rather than suggesting they’d be a nightmare to get drunk with.

‘Takes no shit from anyone’

This sounds tough but instantly marks you out as someone who enjoys disagreeing with people for the sake of it. The type of person who would threaten to punch a stranger in the pub for looking at them ‘funny’, or enjoy sending death threats to people on the neighbourhood Facebook group who they believe have disrespected them.

When all else fails, just be honest about it. At least if you tell someone they’re a bellend to their face, it’s unlikely they’ll want to hang out with you ever again.

It's great to be back to normal, says man downing six pints on a Wednesday morning 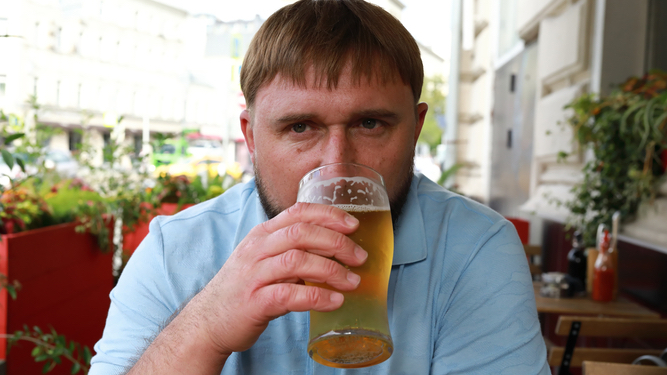 A MAN keeps saying how great it is that things are back to normal, as if getting shitfaced in a freezing cold pub garden in the morning was something he used to do often.

Stephen Malley has visited his local pub every day since it opened on Monday and got absolutely pissed before midday every time.

Malley said: “It’s just great to feel like life is getting back to usual. I suppose I wouldn’t normally be drinking in the morning as I’d have been sacked if I wasn’t still furloughed, but you know what I mean.

“I guess I wouldn’t generally choose to sit outside a pub garden in April, with my hands becoming numb as they clutch a frosty pint of lager, and the sleet turning my ears blue.

“In fact, that would be stupid. But to be honest I’m so desperate for life to get back to how it was that I’m prepared to suffer for it.

“Or maybe I’m just an alcoholic. Hard to say.

“I can’t wait to do all those things I used to. Although to be honest I might not bother because I’ve discovered getting pissed immediately after getting up is the only thing I really enjoy.”