Elaborate sexual fantasy gets too elaborate

A MAN’S elaborate sexual fantasy has become too elaborate to be manageable, he has admitted.

Nathan Muir has been adding to the fantasy wank-by-wank since early October and can now barely remember who half the women are or what he is meant to be doing.

He said: “It began with my sister-in-law, as is normal for all married men, and moved through her to that mate of hers who comes to parties, at which point on a whim I threw my ex-girlfriend into the mix.

“That developed into a whole harem fantasy and I was adding girls right and left – her from the school run, Emily Ratajkowski, that nice piece who did the sexual harassment presentation at work – not even keeping count.

“Next thing I know, I’m imagining I’m in some kind of Las Vegas penthouse with an entire floor full of women at my beck and call me but it’s all become so sprawling and generic it doesn’t excite me in the least any more.

“This is what being Leonardo DiCaprio must be like. I don’t envy him.”

Muir added: “I’m going back to basics. Get This Morning on.”

Nobody trusts couple who do everything together 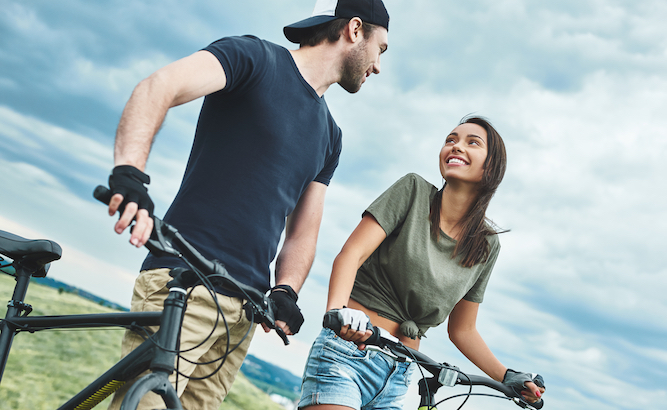 A COUPLE who spend all their free time together enjoying the same things have ‘something wrong with them’, according to friends.

Joseph Turner and Helen Archer have been together for four years and their easy closeness has become a growing source of fear and suspicion for anyone who encounters them.

Friend Mary Fisher said: “They turned up at my barbecue on bikes. Both of them. Together. Looking over the fence. Smiling at each other. It’s fucking creepy.

“And it’s not just cycling. She loves the Marvel movies now and he’s as passionate about upcycling vintage furniture as she ever was. They go to antiques fairs together even though that’d be the perfect opportunity for one to stay at home.

“They never slag each other even when you get them alone, they never row. I wouldn’t be surprised if they still had sex.

“Honestly, it’s like they don’t even want to leave separate lives.”

Neighbour Wayne Hayes commented: “I hear them through the wall, cooking together. Eating together. Washing up together.

“It’s like they get a kick out of being together even when no one’s watching.”