Everyone too up themselves to make the tea

WORKERS are going without hot drinks because everyone in the office thinks they are above making tea.

The traditional drinks round has become a ‘tea deadlock’ as colleagues would rather die of thirst than lower themselves to heating water and pouring it into vessels.

Sales assistant Tom Logan said: “I badly want some tea. But I see myself as management material so I won’t do what is basically manual work. Sure I could just make a single cup of tea for myself but that’s a bit ‘potential serial killer’.”

Logan’s colleague Emma Bradford said: “I would participate in tea making but only as a group effort within a team-building context. Alternately I would project manage a round of hot drinks, or oversee tea preparation in a freelance consultant capacity.”

The tea deadlock is particularly endemic across boring industries like financial services, where there are lots of insecure spivs. But even work experience people are no longer comfortable boiling a kettle.

19-year-old ‘intern’ Nikki Hollis said: “Making tea is against my human rights. I might burn myself, and also I should be running the company because I have a blog about sunglasses.”

Professor Henry Brubaker said: “It may seem like a trivial thing, but this demonstrates perfectly why humanity will soon destroy itself.”

Labour manifesto ‘should include thing about killing all the rich people’ 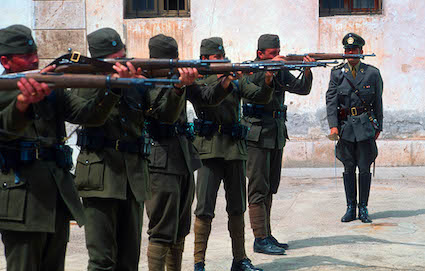 ED Miliband has been urged to ‘be bold’ with the next Labour manifesto including tax reform, NHS funding and putting all the rich people up against a wall.

In an open letter published in the Guardian, they said: “Go on, just do it. Everybody hates rich people, so it’ll be really popular.

“Also, promise to make all the nice things cheaper. Dead millionaires and cheap nice things. That’s how you win elections.”