A FATHER of two has sent shock waves through his family by showing a complex emotion.

When asked by his teenage daughter what career aspirations he had as a youngster, chartered accountant Bill McKay reportedly went very quiet and mumbled something about racing cars.

Daughter Susan McKay said: “Something flashed across Dad’s eyes. I think it was sadness mixed with inexpressible regret, but I can’t be sure because I’ve never seen him feel anything. It was horrifying.

“Dad has always been our rock – by which I mean he is basically inanimate.”

McKay’s son Andrew added: “Dad is normally the kind of person who just gets on with life. He’s very practical and keeps himself busy – taking out the bin, giving us lifts, or burying his feelings in the garden.

“I want Dad to be happy, of course, but more than that, I want him to be completely emotionally neutral.”

McKay’s wife Jane said: “I know men can have a bit of a wobble as they reach middle age. But I never dreamed he’d start emoting.”

Mr McKay has confirmed that he will be not be showing emotion again for many years. 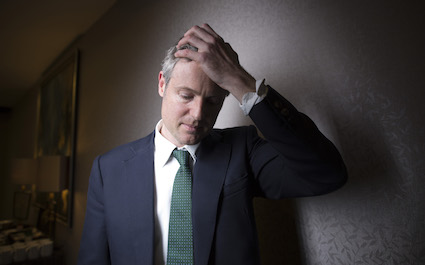 A FURIOUS Zac Goldsmith is throwing gold bars through 90-inch televisions, it has been confirmed.

The 41-year-old was seen breaking Faberge eggs, putting his foot through a Picasso and hurling an Eames chair out of a window onto a Bentley.

Passer-by Eleanor Shaw said: “I saw him staring out of the window of his Richmond Park home, then suddenly he gripped the neck of his £880 tailored organic cotton shirt and tore it in two.

“He went on a rampage of luxury destruction, throwing an iMac into a Ming vase, snapping a De Beers diamond necklace with his bare hands, and repeatedly smashing a Stradivarius violin into an antique crystal Italian chandelier.

“He stopped to catch his breath and I thought it was all over. Then he opened the safe.

“Within moments the whole room was a blizzard of shredded banknotes and property deeds, which he then set alight with the fumes from a case of 200-year old cognacs.

“He came out and sat on the front step, head in hands, distractedly flicking a handful of Krugerrands into the gutter.

“I heard him muttering to himself, ‘Calm down, Zac. It’s okay. No damage done. No real damage done.’”