A PLAN to install slop buckets in homes and offices has raised concerns that being environmentally-friendly could start to become a bit of a pain in the arse again.

Environment secretary Hilary Benn boosted Labour's election chances yesterday by pledging to fit every building in the country with a festering bucket of left-over salmon that will stink like a Frenchwoman's gusset by the middle of August.

But according to recent surveys most consumers believe buying expensive goods with pictures of trees on them is a valid contribution and have no intention of living next to a swing bin full of rancid cheese and luke-warm Fanta.

Architect and father-of-two Tom Logan said: "I don't mind buying the rainforest biscuits or the dreadful sandals made from reconditioned cat uterus.

"I've even gotten rid of my telly and now take great satisfaction in telling people that I watch films and the news on my laptop.

Teacher and Ecover washing up liquid owner Nikki Hollis said: "I firmly believe we must safeguard the planet's natural resources for future generations, as long as it doesn't involve too much fucking about.

"I just hope the government doesn't raise the moral obligation bar to a level where you have to put yourself out a bit, for example by buying old fashioned nappies that you have to wash the turds off, or take glass bottles back to the shop for a refund like one of the Bash Street Kids."

Mr Benn said: "There's some lovely stuff right at the bottom. I think this used to be a gherkin."

Tories Publish First Ever Hard-Back Edition Of The Daily Mail 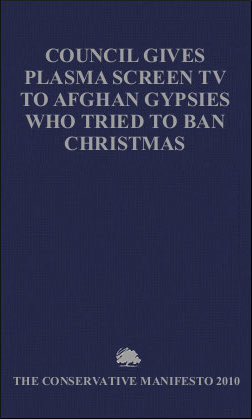 THE Tories will today present their vision of a Britain made-up of self-reliant people with greater control of their own lives who don't like all them Afghans coming over here and stinking up the place.

The party's manifesto will set out plans to build a society of self-governing racists who will finally be able to get on the housing ladder 'cause all them fuzzy wuzzies have been stopped at Dover and thrown back into the sea.

The party has described the 130-page hard back document as an 'invitation to join the government of Britain as long as you were born here and are willing to forego the £190,000 salary and all the free food'.

Tory deputy chairman, Julian Cook, said: "We thought long and hard about the contents of this manifesto and got absolutely nowhere. Eventually we just phoned up Paul Dacre at the Daily Mail and wrote down everything he said."

He added: "As a politician I'm not very interested in policy, but it's mainly stuff about shoving health and safety officers into a vat of boiling tea and sending all the Gypsies back to Gypsania.

"And hopefully Mr Dacre won't notice the bit where we say a few nice things about the homos."

Meanwhile the party's 'people power' agenda includes a plan for directly-elected local police chiefs, raising the prospect of law enforcement being placed in the hands of Kerry Katona and whatever half-pissed, petty criminal happens to be blowing his muck up her at the time.

The manifesto also promises a series of endless local referenda organised by complete and utter maniacs in a bid to destroy the country before it can fall into the hands of a load of sweaty foreigners and their thieving children.

The Tories' sombre and austere Daily Mailogram contrasts sharply with the cover of the Labour manifesto, published yesterday, which depicts an optimistic British family looking forward to a new life in the Dordogne.