DO you want to scare the sh*t out of kids about to move from cuddly primary school to the cut throat corridors of secondary? Tell them these classic lies.

Older kids will flush your head down the toilet

This has probably never happened to anyone except one unfortunate kid in 1971. Even so all children must have this fear planted in their heads so they end up with weird complexes about using public toilets that haunt them forever.

You’ll barely get out of PE lessons alive

Whether it’s rugby, hockey or swimming, there are many ways to be maimed and killed during PE. Tell them a bullsh*t story from your own school days about a child who got impaled by a javelin. Make it more convincing by calling him ‘Pete’ and saying he was in your class.

Bullies will strangle you with your tie

You’ve just spent five years rocking up to school in a Dora the Explorer t-shirt, but now you’ll have to wear a uniform, one part of which is perfect for throttling you. Obviously there isn’t an epidemic of tie-related murders in Britain’s schools or the press might pick up on it, but an 11-year-old won’t know that.

The teachers are hard b*stards

Forget your fluffy primary school teachers – the ones at secondary school are ALL nasty pieces of work who got chucked out of the army for being too mental. If you’re feeling particularly sadistic, mention that most science teachers used to be in prison for dissolving people in acid.

You have to learn to smoke

Smoking is mandatory for all secondary school children. If you don’t smoke, you’ll be an outcast and bullied for the whole time you’re there. If a worried child asks if there are any non-smoking schools he can go to, you’ll know your lie has done its job.

I'm Boris and I do what I f**king like 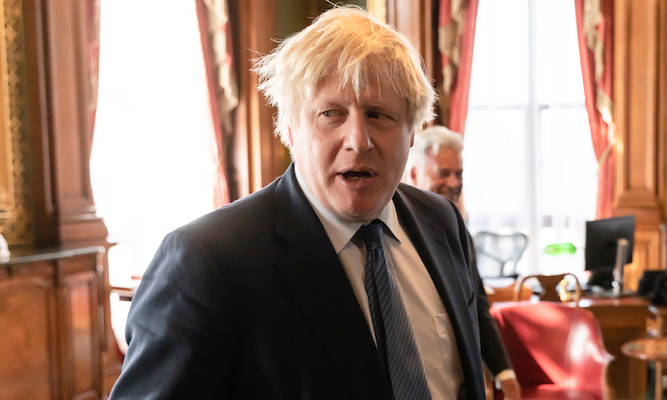 IT seems my opponents have signed a pledge to legislate against no-deal Brexit. Sadly they appear to have forgotten that I’m Boris, and I do whatever I f**king want.

I am not bound by your petty laws or morality or the fact I have a parliamentary majority of one. None of that matters. I get my way because I always have. Anything else is unthinkable.

Parliament’s going to vote against me? Boom. No more Parliament, bitches. The British people won’t award me a landslide election victory? Then I guess we won’t be having any f**king elections.

Sure, hold your little vote of no confidence, Remainer Tories. I’m Boris. I’m not going to resign just because convention dictates it. I will remain in Downing Street for as long as I want. I’ll board myself in the loft with a cricket bat if I have to. You won’t get me out.

I’m Boris. If I want it, I take it. If I want to shag your wife, I’m shagging her. So shut up with your ‘constitutional outrage’, ‘undemocratic’ and all that cock. From now on, democracy is what I say it is. Which happens to be: Borisocracy.

Perhaps I should have mentioned earlier I was a crazed egomaniac with dictatorial tendencies but let’s face it, all the signs were there. You loved the Latin-speaking buffoon act, so now let’s all pull together and get behind me doing whatever I want.

Parliament’s over. The Lords will be placed under house arrest and the opposition will be outlawed. The Queen will do what she is bloody told.

Because I’m Boris. And I do whatever the f**k I like.