BEING a man has its perks, but they’re also defined by broad generalisations that no one bats an eyelid at. Here are five blanket statements that blokes suffer on a daily basis:

This is patently untrue because lots of men were crushed by how shit the latest Star Wars film was. Whole theatres were filled with men quietly sobbing into their popcorn as they learnt that the Emperor was Rey’s grandad for some f**king reason. They just usually bottle everything up out of fear of being called ‘bubbly’.

They never really grow up

If being in touch with your inner child makes you immature, then sure, men are guilty as charged. Did it ever occur to you that adult dudes playing Xbox for hours on end in their man caves are actually nurturing the vulnerable part of their psyche? Didn’t think so. That would require empathy.

Most people are. It’s just that men are extremely bad at hiding their fascination with intercourse. Want to put your head above the parapet by saying not all men are like this, and that you’re a progressive sort of guy who isn’t piloted by the needs of his genitals? Good luck with that.

They don’t help around the house

This is such an old-fashioned stereotype that should have been put to bed years ago. Thanks to the haranguing of their long-suffering mums, girlfriends and wives, the modern man performs up to 20 per cent of domestic chores. It’s just that he does them so badly and infrequently that it looks like he’s not pulling his weight.

Women’s magazines would have you believe that blokes are all ‘wham-bam-thank-you-ma’am’. In reality most fellas don’t even make it to the ‘bam’ before blowing their beans and falling asleep, therefore sparing their partner a late night of exhausting physical acrobatics when they’ve got work in the morning. And people still have the nerve to say chivalry is dead.

Muthaf**ker and other insults that make no sense whatsoever 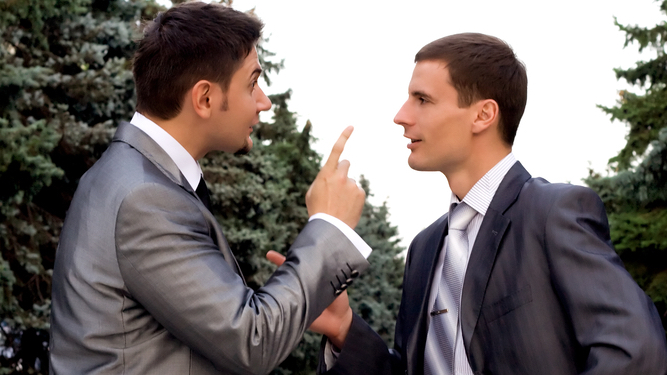 SWEARING is popular, but many insults simply do not stand up to rigorous intellectual appraisal. Here are some of the most illogical ones.

Only a vanishingly small number of people have sex with their own mother, so calling someone a mofo will simply be factually incorrect 99.9999999999999999 per cent of the time.

Again, doesn’t really make sense. A straight guy probably doesn’t suck penises, and if the recipient of your insult is a gay man it’s part of a normal, healthy and varied sex life. If only people would apply some critical thinking before swearing. Sigh.

Cultural differences apply here – Americans find it misogynistic, whereas Britons use it more practically to kick off a pub fight. Either way, it’s so metaphorical it’s utterly ridiculous, like saying ‘Did you spill my pint, you mons veneris?’

Go and f**k yourself

In most mammals and indeed all creatures, your digestive tract requires a way to expel waste. Arseholes are actually very positive things. If someone calls you an arsehole, ask them what they would do without an anus and if they would prefer to die from toxic shock.