Five weird things to have a mental knee-jerk reaction about

HAS the council suggested pedestrianising your local high street? You’d better write a furious rant about it on Facebook. Here are some things that set the dickheads off.

Wouldn’t it be lovely to stroll up a car-free road to do your shopping? Absolutely not. People who leave comments on local news websites will become apoplectic about how not being able to park outside shops will kill the local high street. Then spend £200 on Amazon.

A gang of teenagers could be doing a wholesome litter pick and people would claim it was a ‘drugs gang’. Teens are lazy, drugged-up climate change fanatics who are soft and pampered but also feral yobs. This obviously doesn’t make sense, but it doesn’t matter if being perpetually enraged is your hobby.

You’d think that installing a few speed bumps to stop children being mown down by giant Range Rovers would be a good thing, but you couldn’t be more wrong. Some nutter on Facebook will have an absolute wobbly over their human rights being infringed because it will take them 11 seconds longer to get to Tesco.

Teachers are Marxists indoctrinating children into becoming woke ‘leftist’ stooges – ideally transsexual ones. There’s no way hundreds of thousands of teachers could have varied political views or just get on with the job. Unhinged types won’t stop making these daft accusations, then get angry because the quitters are leaving teaching.

The BBC has said presenters can wear white poppies this year if they wish, which is a double whammy for full-time angry morons. They can demand the broadcaster be defunded while getting nostalgic about two wars they had nothing to do with. Perfect. 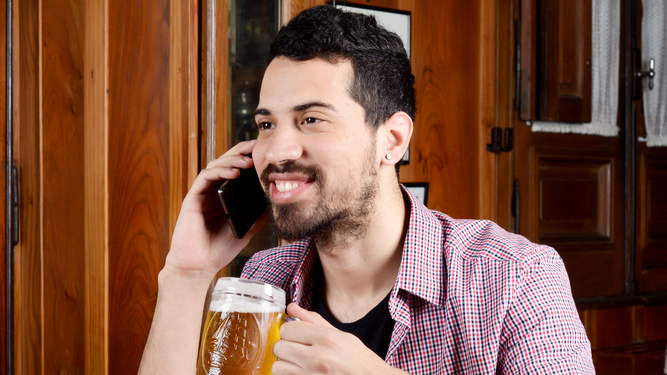 A MAN who addresses other men by calling them ‘bruv’ has not got the required personal characteristics to carry it off.

Martin Bishop recently started referring to male friends, colleagues and bus drivers as ‘bruv’, all of whom agree that the word sounds completely ridiculous coming out of his mouth.

Friend Steve Malley said: “At first I thought he was doing an ironic impersonation of a south London car mechanic so I laughed along. Now I’m worried I might have encouraged him.

“Martin has a West Country accent but is quite well-spoken, so even ‘mate’ jars when he drops it into conversation. Like if anyone born after Shakespearean times were to say ‘forsooth’.

“I don’t think ‘bruv’ counts as cultural appropriation because they do it on Eastenders, so at least that’s not problematic. He just sounds like an utter bellend and nobody wants to hang around with him anymore.”

Bishop said: “Everyone visibly winces whenever I call them bruv and slap my fingers at them. Maybe it would be more appropriate if I called them ‘blud’ or ‘homie’ and said ‘brap brap’ in the future.”