Four Years Until You Can Return To Being A Free-Spending Moron, Say Experts

HOMEOWNERS have just four years to forget everything they may have learned during the financial crisis, experts have warned.

By 2014 house prices are expected to have risen above their 2009 value, allowing mortgage holders to go back to spending the difference on a pot bellied pig, a solar-powered espresso machine and a waterproof television for their shower.

But experts have stressed that many people are still smarting from the recession and may even decide to remember how cretinous they were before some greedy Americans ruined it for everyone.

Julian Cook, chief economist at Donnelly-McPartlin, said: “We are now facing the terrifying possibility that some people may not repeat their mistakes.

“The danger then is that the real idiots will notice them and how content they are with just having a perfectly nice house with a little bit of equity. Not to mention the relaxed, cheerful disposition of someone who does not have to keep spending money to take their mind off how much money they’re spending.

“They must not be allowed to succeed.”

He added: “We’ll probably start off by parking a speedboat in their driveway or one of those Volvos that basically drives itself but with the magical phrase ‘0%’ plastered over every inch of it.

“Or we could just save ourselves a lot hassle and frame them for child molestation.

“It’s rather sweet that you think we wouldn’t.”

We'd Have Done It For A Tenner, Say Thousands Of Awful Cricketers 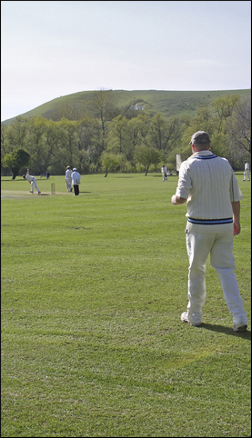 CRICKETERS across England have urged match-fixers to contact them the next time they need somebody to be shit at bowling.

Thousands of county players, semi-professionals and pub team disasters say that for the price of a round at their local they can make it look it very convincing.

Martin Bishop, captain of the Marquis of Granby, currently third from bottom of the Hertfordshire Pub League, said: “If you want someone to make a series of basic errors then probably best not to ask a world class professional who’s been selected on the basis that he knows what he’s doing.

“If I was a match-fixer I would be bribing a couple of thousand lads a week and then making bets in the pub car park. No-one would have the faintest idea.”

He added: “In Hertfordshire, if someone bowls 23 no balls in a row, it’s known as a ‘Martin Bishop’.”

The outcry came after some fearless News of the World reporters showed that some people might be prepared to do something during a sports match that means nothing, affecting a result that changes nothing in return for more money than their family has earned in 16 generations.

“I’m struggling to understand what point the article is trying to make, other than the obvious News of the World suspicion that all foreigners are corrupt because they’re foreign.”

He added: “I assume for their next exposÃ© they’re going to offer some CBBC presenters seventy-five grand to say ‘fuckmoney’ on live TV, or pay John Torode to wipe his spunk across Gregg Wallace’s tasting fork. I just hope they have the decency to use the headline ‘NONE OF THIS MATTERS’.”

Meanwhile millions of people across Britain last night learned that defrauding a bookmaker is illegal and then immediately demanded to know why.