‘CHEESE rolling’ participants in Gloucestershire are furious after discovering cheese can simply be purchased from a shop.

Locals gather annually at Cooper’s Hill, near Cheltenham, risking their lives to pursue a wheel of cheese down a near-vertical slope.  To the best of their knowledge, this was the only way that good quality cheese could be acquired.

Lydney resident Roy Hobbs said: “I do the cheese rolling every year, not because I enjoy it or crave the status of winning, but because the only cheese they sell in my local shop – which to me was the same as ‘in the world’ – is Kraft slices.

“When you’ve had a year of Kraft slices, you’re prepared to risk breaking both ankles and several ribs for a taste of the good stuff.”

However Hobbs, who chooses to live his entire life within a half-mile radius of his front door, was left shocked when he used the internet at his local library and discovered cheese could be easily purchased online.

“The cheese comes to your house the very next day, in a van. You don’t have to run down a steep hill, run through Cheltenham naked under a full moon or wrestle a bull badger.

“Whoever is responsible for the cheese rolling, if indeed it is anything other that collective stupidity, has been lying to us. There probably aren’t bears in the Forest of Dean either.”

Gorillas wearily accept that humans are just not that evolved 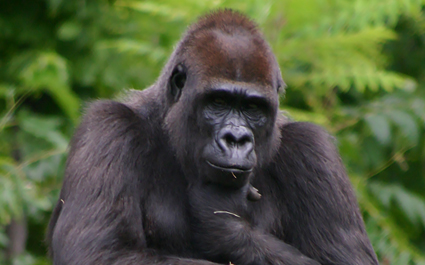 GORILLAS have confirmed they will continue to patiently tolerate the less evolved human species.

Following an unfortunate incident in a Cincinnati zoo, gorillas said they planned to continue quietly chewing vegetation as if nothing had happened.

Western gorilla Tom Logan said: “Humans are dangerous and unpredictable, and you have to be careful not to get too close to them.

“Their heads are full of flashing shapes and colours from those electronic boxes they love to stare at, it makes them ‘loco’. They’re like a stupider, fatter version of chimps – fine in small doses but you wouldn’t want one living in your clearing.”

Despite having a better lifestyle, diet and muscle definition than Homo sapiens, gorillas admire some aspects of human culture.

Logan said: “I once ate something called a Terry’s Chocolate Orange, that was quite delicious. I’ve no idea how they made it, I suppose it’s one of those weird instinctive things like how bees make honey.

“Their buildings and electricity are quiet nifty too. We use to have those things in the jungle, until we realised it was more convenient to just grow a pelt.”

Logan confirmed his plans to spend today lying in his nest casually munching on some foliage while you are at work.