THE immensely popular Game of Thrones books and television series are leading thousands into the desperate squalor of fantasy addiction.

However there is increasing concern that the hit saga is leading them to experiment with even thicker and more outlandish fantasy paperbacks, and in extreme cases to start pushing tiny metal monsters around a table with shy ponytailed men.

Professor Henry Brubaker, of the Institute for Studies, said: “People who read A Game of Thrones often tell themselves it’s a one-off, that they won’t read any more embossed-covered 1000-page books with dragons in except Lord of the Rings which doesn’t count.

“But after you’ve consumed one fantasy epic, it can be hard to stop. We’ve seen people with decent jobs and normal healthy relationships moving on to Dragonriders of Pern novels or the Wheel of Time sequence.

“From there it’s a short, slippery slope towards Warhammer 40,000 and the complete social exclusion that comes with knowing what a ‘chaotic goblin’ is.”

Teacher Nikki Ellis said: “My husband Jeff was a loving, well-adjusted man when he first picked up A Game of Thrones (A Song of Fire and Ice Book One).

“Clearly with a title like that I was concerned, but he assured me it was just ‘magic realism’ like Angela Carter.

“Six months later, he’s made his own suit of armour and stands in front of the bathroom door saying ‘You shall not pass, I am Krell the Magemancer’. If you try to get past he hits you with a rubber sword, shouting ‘minus four strength points’.

“I hate to say this, but it’d be better if he were dead.”

Architect Tom Logan said: “I don’t consider myself a fantasy fan, preferring more literary novels about ageing academics taking stock of their lives. However, unlike Alan Hollinghurst’s books, A Game of Thrones has lots of beheadings, ghost knights and wolves the size of ponies.

“At a recent aspirational dinner party I locked myself in the toilet and read a few pages. I couldn’t help myself, I just had to see how the manipulative dwarf Tyrion Lannister’s evil schemes unfolded.

“But dear god, the shame was so intense. I fear I am entering a dark and unfashionable place from which there is no return.” 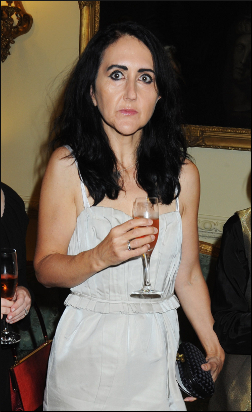 DAILY Mail experiment Liz Jones has urged men across Britain to send her their used condoms.

In a bid to conceive a child for the nation, Jones has launched an appeal for unwanted sperms and hopes the country will inundate her with little bags of semen.

To ensure she has the widest possible choice of reproductive fluid, Jones has devised a seven-point guide to highly-effective semen logistics:

Tie knot in bag (Do not use staples, it could leak).

Jones said: “I can’t wait for the parcels to start arriving. It’ll be like a never-ending Christmas as I rip open each little packet and squeeze the contents into my trembling uterus.”

Meanwhile, she has urged donors not to include a photograph or any personal details as she wants her baby’s surprising DNA to provide up to five years worth of ground-breaking journalism.