Getting ready to go out much more fun than going out

GETTING ready for a night out is infinitely more fun than going out, scientists have confirmed.

Research from the Institute of Studies found that choosing what to wear while listening to music and drinking booze is a lot more fun than a cramped bar with music so loud you cannot speak to the person next to you.

“And by that I mean the time between half six and half nine when me and my friends are drinking vodka, listening to our favourite songs, doing our hair and being able to catch up on what’s being going on in each others lives.

“The bit where we’re queueing up for the club in the pissing rain, before waiting half an hour to get served and then have to pay a fiver for a bottle of room temperature lager is the bit where it’s not as fun.

“But how else are we going to get pictures of us looking like we’re having a good time?”

However Tom Booker said: “I have a shave, get dressed, neck a bottle of Brandy and fall asleep on the couch.

“Then I wake up in the morning £100 better off with pretty much the same hangover. Win, win.”

Theresa May: ‘I have full support of Cabinet for some bizarre f**king reason’ 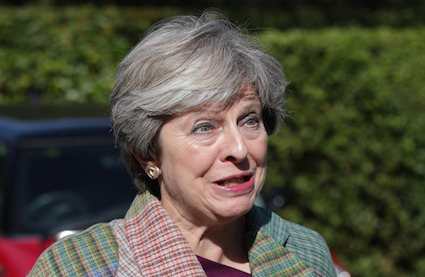 THERESA May has confirmed the Cabinet agrees she is the best person to be prime minister and that everyone should let that sink in for a minute.

Shaking her head and chuckling, Mrs May announced she had the full backing of her colleagues, adding: “How fucked-up is that?”

The prime minister said: “Amber Rudd was like ‘you did really well under the circumstances’ and Philip Hammond was saying I showed ‘great fortitude’ and I’m sitting there thinking, ‘what the fuck are you on about?’.

“Then I’m like, ‘are they taking the piss?’ but no, they seemed completely serious and genuinely sympathetic.

“So then I’m thinking, ‘if these fucknuts are the alternative then maybe I am the best person for the job’. I am quite patriotic when it comes down to it.”

She added: “Me. Theresa May. Best person to be prime minister. Christ on a fucking bike.